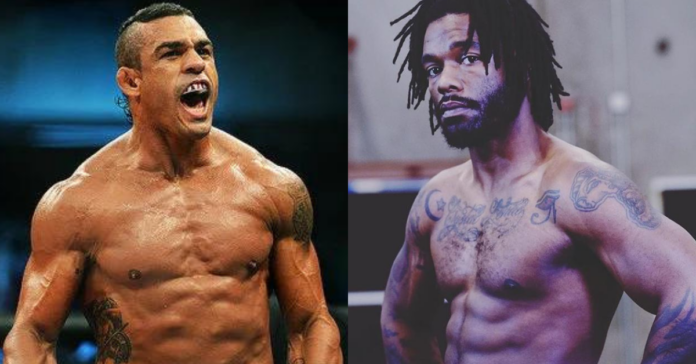 November 19 will host a showdown between heavyweight boxer Hasim Rahman Jr. and MMA legend Vitor Belfort. The two will have an exhibition boxing face-off as the headlining fight of MF & DAZN: X SERIES 003.

Brazil’s Vitor Belfort was a phenom in MMA, winning the UFC 12 Heavyweight Tournament at just the age of 19, he is still the youngest tournament champion in UFC history. The Brazilian athlete would later capture the UFC Light Heavyweight Championship as well. Belfort was notable for his hand speed and power, having won nearly 70% of his career fight by way of KO/TKO. In his storied professional career, Belfort fought a massive list of notable fighters including Lyoto Machida, Anderson Silva, Randy Couture, Jon Jones, Dan Henderson, Michael Bisping, Rich Franklin, Alistair Overeem, Chuck Liddell, Kazushi Sakuraba, Wanderlei Silva, among many others.

Belfort has not fought in MMA since 2018. In a 2021 exhibition boxing match, the Brazilian striker earned a first-round TKO win over Evander Holyfield who was in his late 50s at the time.

Hasim Rahman Jr. is a 31-year-old professional boxer who is just coming off a losing bid in his match to capture the vacant WBC-USNBC heavyweight title earlier in 2022.

“It’s an amazing event. I’m excited to be a part of it and to especially test myself against a legend. This is a former UFC champion, a Brazilian Olympic alternate in boxing, a true martial artist and competitor; I’m ready to prove why he speaks so highly of me. He’s been at the top of a bill before, the main event, he’s done it all. I’m here to take advantage of these opportunities and I’m happy to show people why I’m one of the most dangerous people in combat sports. Period.” [Transcript Courtest of Britishboxingnews]

Vitor Belfort responded in kind with:

“This is legendary. For me, martial arts is something I’ve always grown up doing so I’ve never been able to do both. Now I’m fighting one of the best prodigies in boxing and I’m very excited for it.”

Even though this may be booked as an exhibition, both fighters have been training at maximum ability and will be seeking the knockout win. Rahman Jr. finished by saying:

“We already know what he is, what he does, what his strengths are, and there’s nothing hungrier than a wounded lion that’s still hungry like him. He’s been at the top of this sport, but it’s time for a new king.”