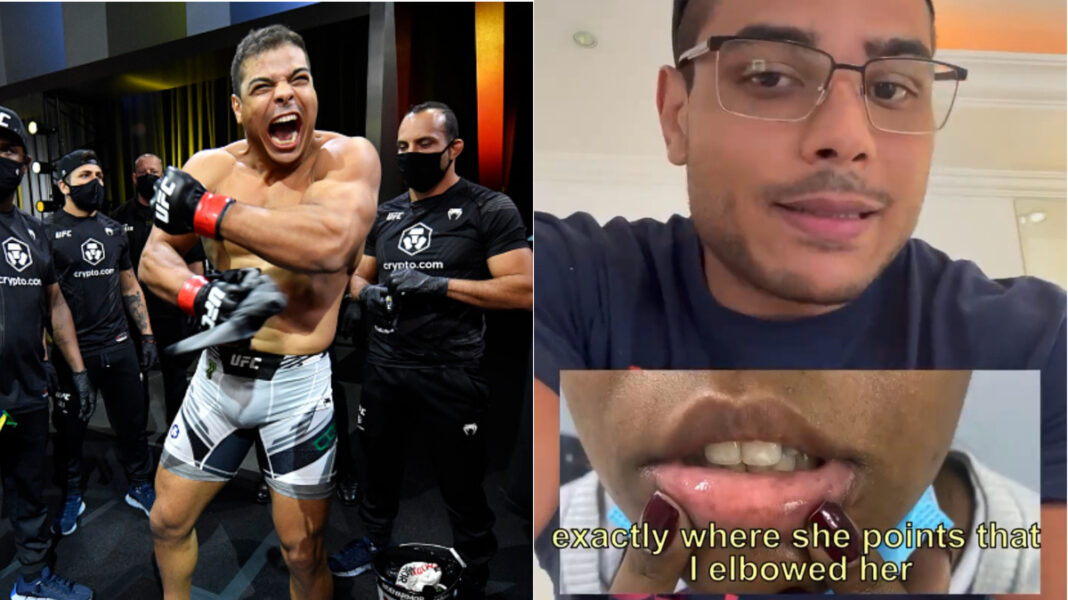 UFC middleweight title contender Paulo Costa is battling some serious accusations that include allegedly elbowing a nurse over a vaccine card. The news emerged earlier this week, and now, Costa has released a video statement on the situation.

“Hello people, unfortunately, this is not a funny video,” Paulo Costa began on Twitter. “But, it’s very important to be here and speak in English, as I did before: but I speak in Portuguese for Brazilian people.”

“…It’s very important to me that everyone who speaks English knows as well about the fact that has been widely reported recently. Very terrible news against me, right? A false accusation of physical aggression was leveled against me… I will show for you guys, the facts, the proof.”

“I’m being accused of elbowing a woman, who is supposed to be a nurse, on her face. I’m a professional MMA (fighter), can you imagine the damage my elbow may cause on (an) unprotected woman’s face? Something terrible to even imagine… That never happened, and I will show you guys why. I have proof of that.”

“Ok, direct to the point, this photo has been taking by the police officers, at the police station. Just a few hours after the alleged incident. Can you see, this is the supposed victim of my elbow.”

“And more, we have more photographs of the inside of her lips, this part. Exactly where she points that I elbowed her.”

“Which, unquestionably shows she hasn’t been subjected to any form of physical violence. That’s impossible (referring to the way the victim looks after the alleged elbow),” Paulo Costa concluded. He’d then go on to speak about how any violence towards women is “completely unacceptable,” and those false allegations such as the one Costa believes he is facing, discredits the true violence towards women that takes place (according to him).

“We all know that this kind of false accusation is very serious, so, I really hope that this woman decides to make her public apologies. Or else legal actions may be necessary, unfortunately.”

‘Borrachina’ would wrap up the video by saying his goodbyes after that, and he’d also outline his reasoning behind it. Saying he wanted to basically let the truth be known.

Costa (13-2, 5-2 UFC) is currently riding a two-fight skid heading into this Luke Rockhold fight and is undoubtedly looking to turn things around with a win and get back into the title fight conversation.

‘The Eraser’ was a seemingly unstoppable dominant force on his way up the treacherous rungs of the middleweight divisional ladder. Convincing victories over the likes of Uriah Hall and Johnny Hendricks forged the path to his fabled Yoel Romero fight, which many say was one of if not the best fights of 2019.

Then, came the losses. A title fight against Israel Adesanya ‘exposed’ Costa, according to critics. And most recently, Marvin Vettori bested Paulo Costa in a five-round war back in 2021.

Could this Luke Rockhold fight be just what Paulo Costa needs to get back on track, and what do you make of his statement on the assault accusations?