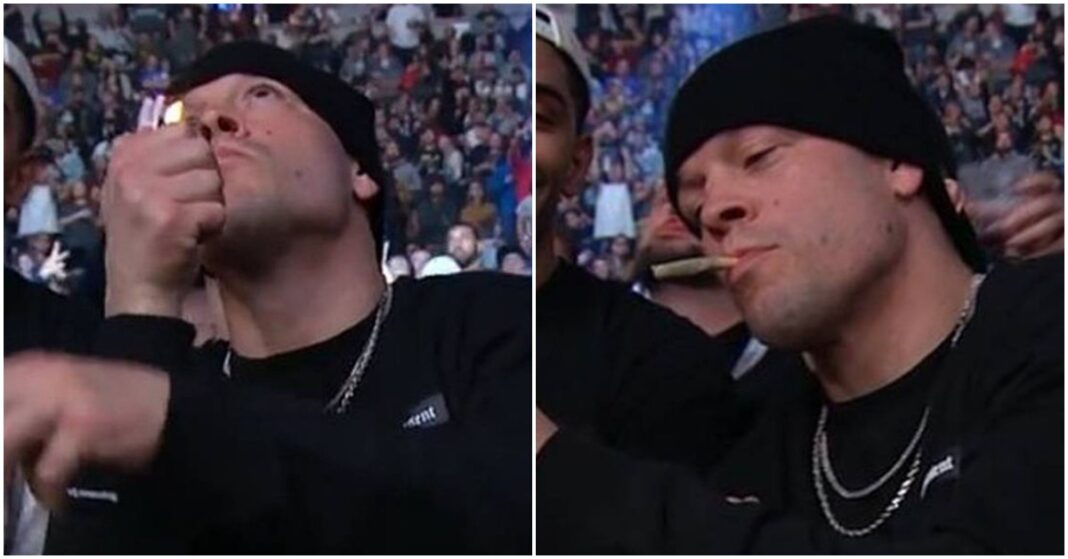 Nate Diaz was in attendance at the Honda Center in Anaheim, California to watch Francis Ngannou become the undisputed heavyweight champion at UFC 270 last night.

The MMA fan favourite was one of many famous faces in the crowd and when his moment came to appear on the UFC 270 live broadcast, Diaz didn’t disappoint.

After realizing the camera was on him Diaz put a joint in his mouth and lit up before the broadcast quickly panned away from him and onto heavyweight boxing legend Mike Tyson.

READ MORE:  Jamahal Hill Sets His Sights On A Future Matchup With Jiri Prochazka- "It's Gonna Be One Of The Best Fights The People Have Ever Seen"

The UFC is facing something of a revolt from its biggest stars with Diaz and Ngannou leading the way.

The Stockton, California native has just one fight left on his deal which technically expired at the end of 2021. Diaz opted to extend the contract to get his final UFC fight in but seems uninterested in inking a new deal with MMA’s premier promotion and will most likely become a free agent in 2022.

‘The Predator’ is in a similar position. Ngannou fought out his UFC contract last night when he beat Ciryl Gane by unanimous decision to become the undisputed heavyweight champion. However, a clause in his contract means that as champion, Ngannou is now tied to the UFC for a further three fights or one year – whatever comes first.

At the UFC 270 post-fight press conference, Ngannou revealed that he will sit out and wait for his contract to expire rather than fight again for his current pay packet.

READ MORE:  Nate Diaz Calls For July UFC Return: 'Is The Whole Roster Scared Or What?'

“In the past three years I have fought three times, so what does that mean? Once a year,” Ngannou said about potentially sitting out for a year. “It wouldn’t be something strange. I’m not frustrated about anything, I’m at peace with my decision.”

Ngannou has often been linked to a boxing match with Tyson Fury and is determined to make that bout happen with or without the help of the UFC.

What do you make of Nate Diaz’s antics at UFC 270?