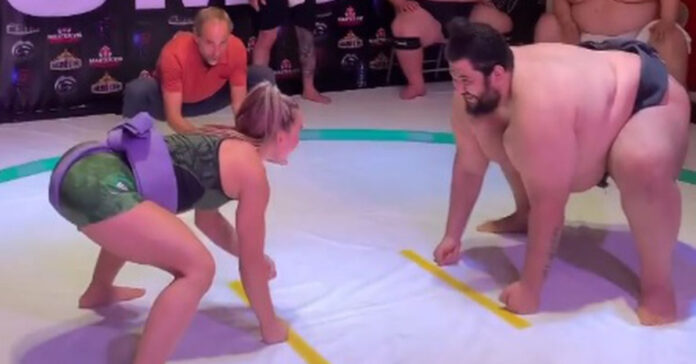 UFC’s ‘Lil Monster’ Vanessa Demopoulos has made her first, and likely last foray into sumo wrestling.

Reminiscent of the UFC’s early days when weight classes were unheard of, the strawweight competitor decided to test her skills against Egyptian sumo wrestler Ramy Elgazar. Tipping the scales at 499 pounds, Elgazar outweighs Demopoulos by more than 380 pounds. Needless to say, the sparring match did not go Demopoulos’ way.

Posting a video clip of the brief, but entertaining encounter on Instagram, Vanessa Demopoulos stated that “size doesn’t matter,” but the way things played out, she may have been mistaken. At the start of the contest, ‘Lil Monster’ jumps into the arms of Elgazar with something akin to professional wrestling. Perhaps she was going for a cross-body block or a hurricanrana, but neither worked out in her favor. Instead, Demopoulos was playfully launched head over heels and slammed back down onto the mat. The smile on her face following the slam clearly showed the two were just having some fun.

“It was an honor to wrestle World Class Professional Sumo Wrestlers,” said Demopolous in her post on social media.

Despite a loss in Dana White‘s Contender Series, Vanessa Demopoulos was given an opportunity to compete at a UFC Fight Night event in August 2021. On that night she fell to opponent JJ Aldrich via unanimous decision. When it seemed like her UFC career had been cut short, ‘Lil Monster’ got the call to face Silvana Gómez Juárez five months later at UFC 270.

Scoring a first-round submission via armbar, Demopoulos famously jumped into the arms of Joe Rogan during her post-fight interview. ‘Lil Monster’ replicated the celebration with Michael Bisping in June following a split decision win over Jinh Yu Frey.

Following the win, Vanessa Demopoulos confirmed that she would be back in the Octagon before the end of 2022, but was going to take her family on vacation first.

“I’m looking forward to fighting in MMA prior to the end of the year,” said Demopoulos while speaking to Cageside Press. “Right now, my full focus is being able to go on this vacation with my family, which I promised them for so many years now, that as soon as I made it to the UFC, I’ll go to Greece with you guys. So that’s coming up at the end of this month. I couldn’t be happier to spend family time, and then once I get back, I’m gonna be right back into gear and ready to rock n’ roll.”