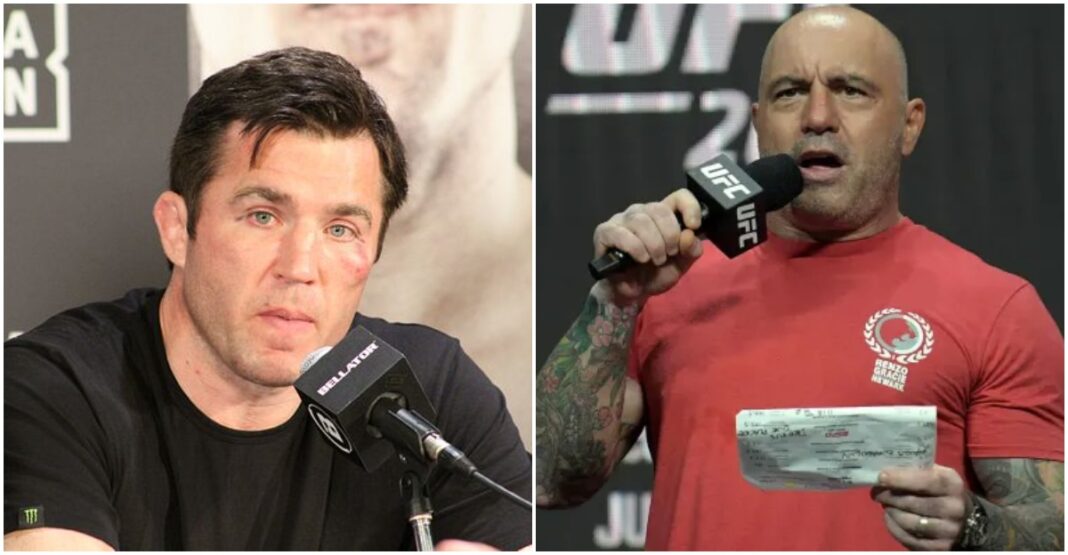 Chael Sonnen has challenged Joe Rogan on his opinion regarding a boxing match between Canelo Alvarez and Kamaru Usman.

‘The Bad Guy’ gave his take on the potential fight and sat on the other side of the fence to Rogan. In a recent video on his Youtube channel, Sonnen stressed to his viewers that what occurred in the Floyd Mayweather vs. Conor McGregor fight doesn’t apply to all MMA fighters who seek to transition to boxing.

UFC welterweight champion Kamaru Usman has made it no secret that he has ambitions of boxing Canelo Alvarez. The Nigerian has brought it up in multiple interviews, and the combat sports fans have latched onto the idea and ran with it. Analysts across boxing and MMA have shared their thoughts on the fight if it was to materialize, including Joe Rogan and Chael Sonnen.

Both Joe Rogan and Chael Sonnen share different views, with Rogan believing it would be a smart move from the champion to secure a large paycheck and improve his boxing skill-set tremendously. On the other hand, Sonnen questions why Rogan is under the impression that his statement is accurate, and if he was basing it on the fight between Mayweather and McGregor.

“Joe [Rogan] was very sweet he said [Usman] he could go make a ton of money for one, and two, he would get a lot better,” Chael Sonnen said. “He would really sharpen up a skill set if he was fully focused on boxing so when he comes back to MMA that’s gonna tradition. Now, where are we getting that from? Like what historical evidence do we have of either of those claims because I continue to hear it.”

“If we’re so sure, it’s gonna be so helpful for Kamaru Usman in this case, we could be talking about anybody,” he added. “But in this case [it’s] Kamaru’s money. If we’re so sure, where’s the example? Because it’s only been done one time meaningfully. It was Conor vs. Floyd and yes some guys lost some major money on that. That’s true. Those guys made a ton of money that is true. But it’s also true what I’m telling you. They didn’t rematch for a reason. Somebody made a bad bet. It’s the truth. So if you’re looking over there as an idea for what you’re going to do financially, I would caution you. The other side of the coin, if you can drum up enough interest and you get in on the boxing model which always has something to do with the back and yeah there could still be a meaningful check there, just set your expectations.”

Chael Sonnen continued to back up his statement by eluding that McGregor didn’t return a better fighter after making the crossover.

“And the final thing that I would say, what is it pure boxing that’s carried over and for who did it carry over for, in the sport of MMA, I just think that’s a tough sell, I also know if I was in Kamaru’s spot, I would go do it,” he pointed out. “Regardless of anything that I just said. If that was a one time opportunity, if you have the chance to go test something and by the way against the best in the world, and you think you can compete with him. And you’re a true competitor and Usman is, I would not begrudge any of it, I would understand it fully. I’m just speaking to the comment that it’s going to be helpful to come back over here, it’s only been done one time, it was done by Conor, what about Conor going into boxing and returning to MMA, did you see that you thought was a positive.”

Usman is currently undergoing recovery after hand surgery but is expected to defend his welterweight strap against Leon Edwards this Summer. Then, Alvarez is currently booked for a title fight with Dmitry Bivol, likely leading to a fight with nemesis Gennadiy Golovkin.

Do you agree with Chael Sonnen’s argument against Joe Rogan?