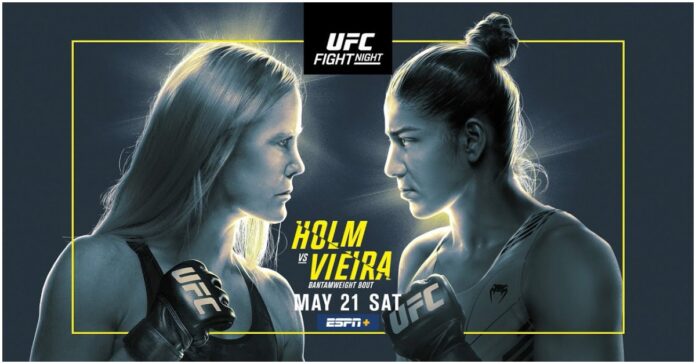 In the last event before the promotion takes a week off ahead of its stacked summer schedule, Holly Holm takes on Ketlen Viera in the headline fight of UFC Vegas 55 in the Apex Arena.

Both women will be hoping to solidify their status as the No.1 contender at 135lbs with a big win at this event. Also featured on UFC Vegas 55 is an electric co-main event between two welterweight action fighters. Michel Pereira and Santiago Ponzinibbio square off in a bout that will establish the victor as a top player in the 170lb rankings.

Former champion Holly Holm will face off against Ketlen Viera in the five-round main event of UFC Vegas 55. Holm is a true veteran of the game at this point, and has developed a round-winning style that repeatedly sees her pick-up wins against all but the very best. Ketlen Viera is a physical force at 135lbs, and has often been able to dominate her opponents.

However, whilst Viera may have moments of success, it is hard to bet against Holm in fights like this. She will consistently rack points with her in and out striking, and her takedown defense is surprisingly solid, to the point where it’s fair to presume she will frustrate much of Viera’s attempts to take the fight to the ground.

Holm can be bet at her ML, which Betway have priced at 1.40. However, her decision prop at 1.83 is equally appealing.

In this UFC Vegas 55 main card bout, experienced striker Chidi Njokuani takes on Dusko Todorovic. We will be taking Njokuani in this fight, on account of Todorovic’s tendency to lunge into exchanges with little to no head movement, whilst his chin remains high in the air. Njokuani hits extremely hard, and will be sure to look for the counter.

Todorovic may have some success if he can bring the fight to the ground, but he will have to weather a storm to get there. We’re betting that his chin will not hold up.

One of the hidden gems of UFC Vegas 55 is buried in the preliminary card. The fight in question is the bantamweight scrap between Jonathan Martinez and Vince Morales. Both men are high-level strikers who love to let their fights play out on the feet. Morales is more of a boxer, whilst Martinez’s style is more akin to that of a traditional kickboxer.

We will take Martinez to win this one, on account of his wider arsenal of striking options on the feet. Most notably are his leg kicks, which Morales has been susceptible to in the past. We expect Martinez to fight a war of attrition, cutting down Morales’ base, whilst simultaneously utilizing high kicks and step-in knees. Look for ‘The Dragon’ to win either by decision or a late KO.

Do you agree with our bets for UFC Vegas 55?