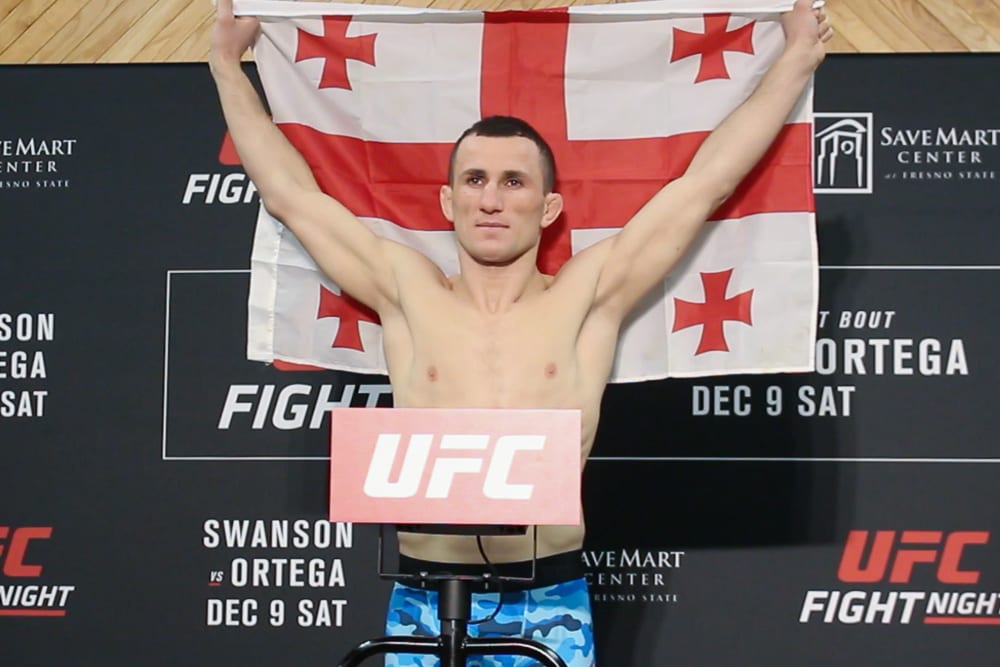 Katona (8-0) entered Saturday night having never tasted defeat. The 27-year-old Canadian entered the contest at a slight underdog at +155 (Bovada).

As for Dvalishvili (8-4). The Serra-Longo trained fighter is yet to be in a boring fight. He defeated Terrion Ware at UFC Moscow last September.

Katona quickly takes to the center of the Octagon and lands a leg kick. Dvalishvili pumps his jab and lands a leg kick. He fakes a flying knee then throws a spinning back fist. Nothing finds its mark but Katona lands a lunging left hand. Katona gets cracked with a big right hand but he eats it and walks forward. Dvalishvili circles right and winds a left hand, he snatches up Katona’s leg for a single leg but Katona wiggles free. Katona looks for a takedown of his own as he presses Dvalishvili against the cage. Dvalishvili reveres the position and puts Katona on his back. Less than one minute to go and Dvalishvili is in top control. He lands a few soft punches and a few hammer fists as the round comes to an end.

Katona presses forward to start round two. Dvalishvili takes advantage and scores a takedown. He puts Katona on his back. Katona looks for a choke but there is nothing there. Dvalishvili passes into half guard and lands a few right hands to Katona’s face. He finds his way back to full guard. Dvalishvili lands a nice right hand as both fighters battle for position. Two minutes left but Dvalishvili is doing just enough to keep this fight on the ground. A punch here and there. Katona is just helpless as the referee stands the fighters up. Katona wades in with a left hand and clinches Dvalishili. He lands a knee and presses him against the cage. He tries to trip Dvalishvili but instead gets tripped. The round ends.

Katona looks eager to start the final round. He throws a head kick that catches air. Dvalishvili lands a leg kick. Katona lunges in with a lead elbow, Dvalishvili evades and clinches Katona. He tries to throw Katona but he defends and lands a knee. Katona defends a trip and stomps Dvalishvili’s foot. Katona leads with a stiff jab but Dvalishvili times a takedown. He puts Katona on his back again. He lands some ground and pound and moves into Katona’s guard. He postures up and lands some nice offence. One minute to go and both guys are firing. Katona throws his legs up and looks for a Dvalishvili’s heel. The fight ends.