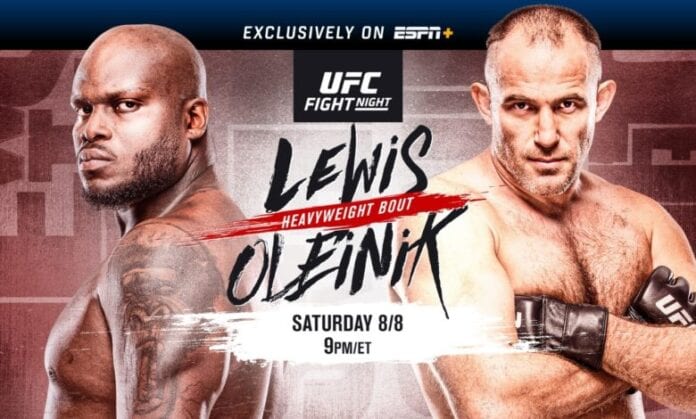 LowKickMMA will be bringing you UFC Fight Night: Lewis vs. Oleinik results throughout tonight (Sat. 8th Aug, 2020) from the UFC Apex, Las Vegas.

In the main event of the evening, we will see a matchup between two ranked heavyweight contenders. Derrick Lewis takes on Aleksei Oleinik in a five-round main event. Coming off a recent victory over Ilir Latifi, Derek Lewis is looking to keep his spot at the top of the division by defeating the rising grappling specialist. Oleinik is coming off a win over the former champion Fabricio Werdum at UFC 249. In the co-main event, we will see the return of former middleweight champion Chris Weidman when he takes on the number 11 ranked middleweight contender Omari Akhmedov.

Check out our UFC Fight Night: Lewis vs. Oleinik results below. Also, make sure to follow along with us on twitter @LowKick_MMA