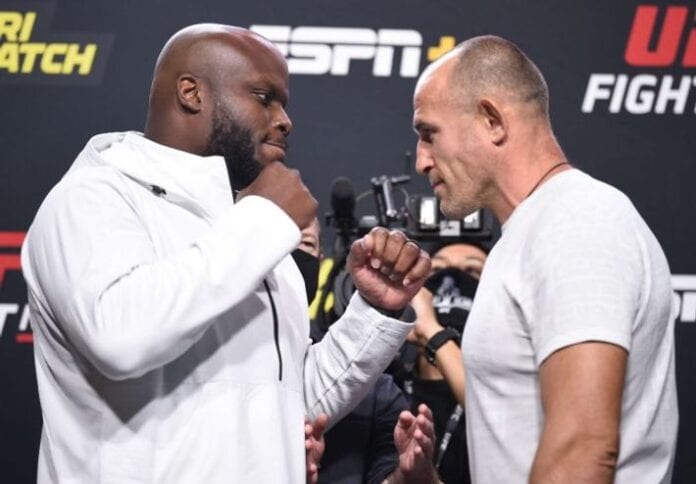 Headliners Derrick Lewis and Alexey Oleinik both make weight today. With Lewis weighing in at the 265-pound limit, and his opponent Oleinik tipping the scales at a slim 227 pounds. Lewis and Oleinik will be going to war, in an old school striker vs grappler style match up, except both of these guys can do everything.

In the co-main event, we see Chris Weidman make the 186-pound limit after moving back down from light heavyweight, seemingly on the chopping block losing 5 of his last 6 fights by brutal stoppage. His opponent Akhmedov weighing in at 185.75, the former welterweight has looked resurgent at middleweight, he’s looking to earn his biggest win to date against the former champion.

Beneil Dariush weighed in at 158 against his opponent Scott Holtzman. He was fined 20% of his purse and the bout has been changed to a 158 pound catch weight.

Laureano Staropoli and Tim Means both missed weight, with Staropoli weighing in at 174.5, and Means hitting the scales at 172.5 pounds. Although Means was able to make the 171 pound limit with his second go. Staropoli was fined 20% of his purse and this bout will go on as a 174.5 pound catch weight.

**Means missed weight on his first attempt, coming in at 172.5 pounds, but was allowed extra time to cut weight. He successfully made weight at 171 pounds on his second attempt

***Staropoli will forfeit 20 percent of his purse and his bout with Means will proceed at a 174.5-pound catchweight