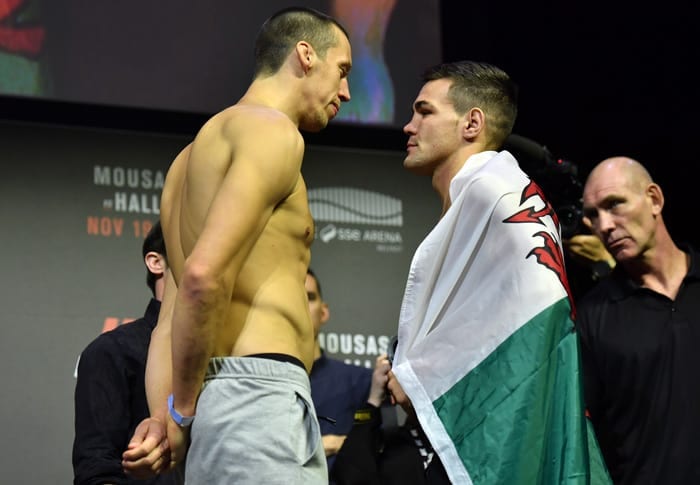 It’s once again fight day here at LowKickMMA, and the talent on display today (Saturday, November 19th, 2016) will come in the form of UFC Fight Night 99. Headlining the card are Gegard Mousasi and Uriah Hall, but there’s a whole bunch of great fights also taking place on the preliminary section of the card.

Magnus Cedenblad and Jack Marshman met in a middleweight bout. This was the final fight of the preliminary card. In round 1, Mashman dropped him early in the round but didn’t finish him. Cedenblad took him down and busted him up with elbows and strikes from the top position. In round 2, Mashman was bleeding heavily from his right eyebrow. Marshman tried to get something going with his hands but Cedenblad kept backing him up with jabs. The crowd was going nuts at this point. Cedenblad slipped and Marshman landed some shots while he was getting up. Cedenblad finally shoots and gets the easy takedown, but Marshman right back up. Marshman drops Cedenblad and finishes him on the ground.

Kevin Lee and Magomed Mustafaev met in a lightweight bout. In round 1, Mustafaev came out and rocked him. They clinch and Lee took him down within the first minute of the round. Mustafaev scrambled to his feet, went for a guillotine choke but Lee slammed his way out of it and got guard. Mustafaev scrambled to his feet and clinched with him halfway through the round. Lee scored another takedown and got half guard. Lee transitioned to back mount and went for a rear-naked choke but the bell sounded. In round 2, Lee scored an early takedown and worked him over with strikes but Mustafaev got back to his feet. Lee landed some knee strikes to the body and then another takedown. Lee transitions to back mount and locked in the rear-naked choke but Mustafaev got out of it. Mustafaev scrambled and Lee got on top in half guard. Lee transitions to back mount and worked him over with strikes. Lee locked in the rear-naked choke for the win.

Amanda Cooper and Anna Elmose met in a strawweight bout. In round 1, they had a feeling out process early. Cooper was pressing the action and landing some good combos. Elmose dropped her with a big right hand and swarmed her with strikes from guard. Cooper survived the round. In round 2, Elmose slips and Cooper tries to take advantage by going for full mount, but Elmose scrambles to get top control. Elmose works her over with strikes. Copper scrambles and gets on top in half guard. Copper rained down elbows from top position and went for an armbar but the bell sounded. In round 3, Elmose pressed the action but Copper took her down late in the round and got guard and landed a series of strikes. Cooper won the fight by decision.

Mark Godbeer and Justin Ledet met in a heavyweight bout. This one did not last long at all. Godbeer pressed early and was landing some leg kicks. Ledet started to let his hands go and scored a takedown. Ledet got guard and worked him over with strikes. Godbeer scrambled to his feet and clinched then pulled guard.  Ledet got his back and locked in the rear-naked choke for the win.

Zak Cummings and Alexander Yakovlev met in a welterweight bout. In round 1, Yakovlev poked Cummings in the eye early in the round. Back to the action, Cummings caught his leg and scored a takedown but let Yakovlev back up to his feet. Cummings clinched and pressed him up against the fence. Yakovlev separated and started to find his range and tagged him. In round 2, Big leg kick from Cummings sends Yakovlev to the mat but he shoots right back up. Cummings pressed him and Yakovlev shot in for a takedown but Cummings stuffed it and locked in an armbar in the process for the win.

Brett Johns and Kwan Ho Kwak met in a bantamweight bout. In round 1, Ho Kwak was aggressive early but Johnson was backing him up and shot in on a single-leg takedown and got it. Ho Kwak scrambles back to his feet. Johns keeps him pressed up against the fence and took him down. Ho Kwak once again scrambled to his feet. Johns took him down late in the round and got side control and worked him over with strikes. In round 2, Johns rocked him with a right hook right out of the gate. Ho Kwak backed up as Johns pressed and looked for a takedown. This led to the two men clinching up against the fence. Ho Kwak pushed him off halfway through the round and landed a spinning heel kick. Ho Kwak landed a flying knee to the chin. With under a minute to go, Johns scored a takedown and got half guard. In round 3, Ho Kwak came out strong as he was landing combos and Johns was covering up before scoring a takedown early. Johns worked him over with strikes from guard. Ho Kwak scrambled to his feet late in the round but Johns clinches with him up against the fence. Johns won the fight by unanimous decision.

Opening the UFC Fight Pass prelims was Abdul Razak Alhassan vs. Charlie Ward in a welterweight bout. This one did not last long at all. Alhassan rocked him with two right hooks. Alhassan dropped him with another right hook and walked off as the fight was stopped.

Welterweight bout: Zak Cummings def. Alexander Yakovlev by submission (armbar) at 4:02 of Round 2