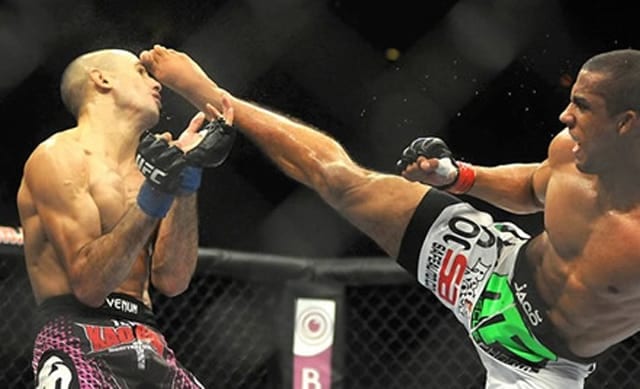 This makeshift main event may have had some allure a few years ago, but with Mir coming off a long layoff and four losses, it’s obviously lost quite a bit of its former shine. Still, it could still be a potentially exciting affair. Heavyweight is shallow right now, and either fighter could conceivably find themselves a couple win from contention if they can get the ball rolling in Porto Alegre. To do so, “Bigfoot” will obviously want to keep this fight standing. He has some vicious ground and pound, but taking Mir to the ground just isn’t in his best interest. Mir will obviously want to get this bout to the mat, but he hasn’t exactly been adept at doing that in his recent losing streak. Claiming to be rejuvenated, Mir will need to be, as he outstruck 139-5 by Alistair Overeem in his latest loss. Despite having lost two out of his last three, “Bigfoot” has never been submitted. That does not bode well for Mir, so Silva via second round TKO is my pick.

I’m unsure as to whether Frank Mir can hang with elite heavyweights any more, or even mid-tier fighters. His chin has looked terribly suspect, although he did survive full fights with Daniel Cormier and Alistair Overeem, and Antonio Silva is renowned for his brutal knockout power. In what will likely be Mir’s last fight, I think we are going to see a very ugly side to the Brazilian giant. Submissions are what Mir needs, offensive wrestling is what he has lacked lately. I’m not sure the former heavyweight champion has much to offer in this bout, as he is outsized, outmatched in the stand up and will struggle to get “Bigfoot” down. For those reasons, I’m picking Silva for the first round knockout win.

This bout features two struggling big men as former champion Frank Mir takes on Antonio “Bigfoot” Silva. Mir is on a terrible four-fight losing streak in which he has looked utterly awful, while “Bigfoot” is coming off of a no-contest followed by a suspension, and most recently he was brutally knocked out in the first round by Andrei Arlovski. I would definitely say Mir has the ground advantage, as he is tied for most submission victories in modern UFC history. That being said, I would give Silva the striking advantage as he possesses lethal power in his huge hands. Both men will be hungry for a win, but it will be tough for Mir to drag the Brazilian’s huge frame to the matt. I see “Bigfoot” landing some huge shots and putting Mir away early. Silva by first round KO.

This is the true UFC Fight Night 61 main event in my eyes, a contest between two dangerous strikers with momentum fighting in a deep division. Barboza may not be the relentless killer he once was, but he’s looked accurate and dangerous in reigning in his striking to stay out of harm’s way. His win over Bobby Green was masterful, but he has his hands full with “Menace.” Johnson built up a decent win streak before injuries and a suspension for domestic abuse derailed his hype train a bit, and I think those things will affect his performance against the No. 6 Barboza. He’s an extremely tough fight to come back to, and a win would fast-track him to near the top of the division. But I think Barboza’s lightning fast hands and feet will be just one step ahead of Johnson, who could be affecting by a small amount of ring rust. I’ll take Barboza by unanimous decision.

Edson Barboza against Michael Johnson is truly a quality matchmaking job by Joe Silva. If this fight is going to take place in the striking, I’d give Barboza a pretty sizeable advantage, but Johnson is certainly the boss if he uses his wrestling skills. “Junior” has some of the most savage striking in the entire UFC lightweight division, perhaps of the whole organization, and I figure he’ll try to keep his distance like he did with Bobby Green. “The Menace” hasn’t fought in nearly a year, and I think Barboza’s striking will win the day. Edson Barboza by unanimous decision.

This is an interesting match-up between two very talented lightweights who are looking to move up the crowded 155-pound rankings. Barboza, currently ranked No. 6, is known for his deadly Muay Thai skills. He has some of the most devastating striking on the roster, and is very unpredictable. Johnson, who sits at No. 12 and trains with the Blackzilians, is very well rounded. He’s fast, and has great wrestling. However, Barboza has strong takedown defense plus a slick ground game. Johnson is riding a three-fight win streak, but he’s also coming off of a long layoff due to injury. I see Barboza keeping the fight on the feet and battering Johnson. Barboza by unanimous decision.