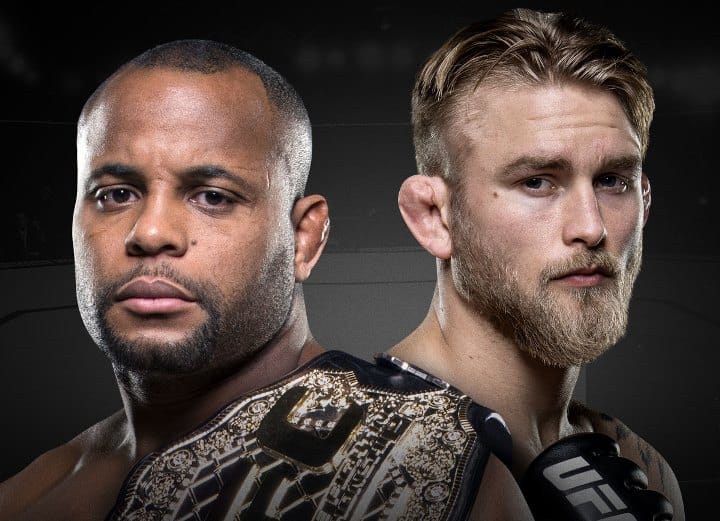 The weigh-ins are done, and the fighters are ready, as UFC 192 is set to go down tomorrow night (October 3, 2015) live on pay-per-view from the Toyota Center in Houston, Texas. In the main event of the evening, newly crowned light heavyweight champion Daniel “DC” Cormier will put his title on the line for the very first time against Swedish star Alexander “The Mauler” Gustafsson.

The story in the buildup to this fight seems to be the drastic height and reach difference between the two, with the advantage heavily going to the 6’5” Gustafsson. However, the former Olympian Cormier is undoubtedly one of the best in the world, making for quite the intriguing fight.

Without further ado, check out the LowKickMMA Daniel Cormier vs. Alexander Gustafsson preview below:

Coming from many years of wrestling at the highest level, Cormier has actually fine-tuned his striking quite a bit over the years training at the famed American Kickboxing Academy (AKA). With six of his 16 wins coming by knockout, the champion has definitely shown his power, and also has shown great striking in the clinch as well, which he will need to utilize against the lanky Gustafsson.

Despite Cormier’s progress, I have to give the advantage here to “The Mauler”. Gustafsson possesses strong boxing skills, throwing his hands fluently, and almost effortlessly. He’s also very mobile, and powerful, sporting 10 knockouts to his name. When it comes to strikes landed per minute Gustafsson outlands the champion which could also play a factor, but at the end of the day, I see it as 55-45 Gustafsson.

There’s not much to say in this category. Gustafsson is in no way a weak wrestler, famously being the first man to take former champion Jon Jones down, while defending almost every one Jones’ takedowns when they met in 2013, but “DC” may be the very best wrestler in mixed martial arts (MMA) period.

Cormier had a decorated collegiate career, and is also a two-time Olympian. It may be hard to get inside, and take the lengthy Gustafsson down, but when it comes to takedowns, “DC” is leaps, and bounds, ahead of the Swede. 60-40 Gustafsson.

Just like the champion has vastly improved his striking game, he has also improved his submission skills quite a bit, and actually used a submission in his last bout to secure the title. Cormier is a brown belt in Brazilian jiu-jitsu, with five submission wins to his name. He has also never been submitted.

Gustafsson on the other hand has a purple belt in Brazilian jiu-jitsu, with only three submission wins to his name, and he’s also been submitted once. It may be tough for Cormier to work a submission on the ground once again due to the challenger’s length, but the advantage still goes to the champion. 55-45 Cormier.

When looking at the stats, and the numbers, it looks as if the champion should be the favorite here, but this is fighting, anything can happen. Gustafsson is a dangerous competitor, and with the right strategy, he could give the champ some problems.

Who do you see winning tomorrow night?