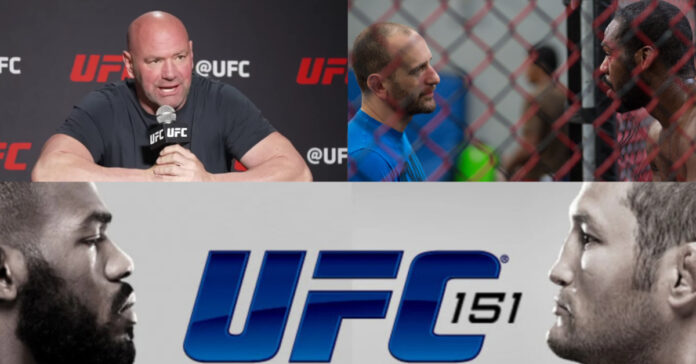 Today marks the 10th anniversary of UFC 151: Jones vs. Henderson. If you don’t recall that event, it’s because it never actually happened.

Scheduled for September 1st, 2012, UFC 151 was to have taken place at the Mandalay Bay Events Center in Las Vegas. The headliner was to have been between then-reigning light heavyweight champion Jon Jones defending his title against Dan Henderson. The main event was put together to help boost PPV buys after the UFC’s previous two events were met with little fanfare and sub-par buyrates.

A little over a week before the event was scheduled to go down, Henderson notified the UFC that he ruptured his MCL and would be unable to compete. Scrambling to find a short-notice replacement for Henderson, the UFC settled on former middleweight title challenger Chael Sonnen. Jon Jones declined the fight. That’s when things went from bad to worse.

With an already thin UFC 151 card propped up by Jones’ world title defense, the UFC was left with no choice, but to cancel the entire UFC 151 card. In the official press release announcing the cancellation, the promotion put the blame squarely on Jones and his head coach, Greg Jackson.

“For the first time in the history of the Ultimate Fighting Championship, a UFC champion has refused to face an alternative challenger after an injury to his original opponent, forcing the organization to cancel an event,” read to official UFC press release.

Dana White took a cheap shot at Jackson specifically, calling him the “sport killer,” a moniker that would follow him for years to come.

On the 10th anniversary of UFC 151, the event that never was, the man that Dana White and the UFC vilified, Greg Jackson, spoke to MMA Fighting to discuss their decision ten years ago and the aftermath that followed.

“Well, you know I tried my best to kill the sport, but despite my best efforts, somehow it’s still alive and kicking,” Jackson said. “So I’ll wait for my next opportunity to destroy an entire sport by not taking a fight. It’s a talent. I’m a talented guy.”

While Jackson recalls refusing the UFC 151 change as a team, he is more than willing to accept responsibility for the decision.

“I think it was a consensus, but I’ll take the responsibility for telling Jon, for sure. I was the guy that was like, “Hmm, a new opponent, different style, brand new,” and then some random, “Oh, well this is now the No. 1 contender,” even though I don’t think he really was the No. 1 contender. You know what I mean? I didn’t seem right. It was just like, is this a sport or just fight anybody for the title?”

The man chosen to step in at UFC 151, Chael Sonnen, had just come off of a loss to Anderson Silva for the UFC middleweight championship. When asked if turning down the Sonnen fight was more about the fighter or the short-notice nature of the situation, Jackson confirmed the deciding factor was the short notice more than anything else.

“It was more that, on eight days, but it was also the style. If it was very close — because we were supposed to fight Henderson, and Henderson’s got wrestling, but he’s also got giant right hands, and his wrestling style is different. So from Dana’s point of view it was, “Oh, Jon will just steamroll Chael and then everybody’s happy,” but I’ve been in so many corners, I’ve seen that go bad, and I don’t underestimate Chael Sonnen at all. Zero. That guy can show up as a world-beater. Really.

So, preparation. This is the 205-pound championship of the world. If you’re a 5-0 guy and it’s your first fight in the UFC or whatever, you’re trying to get a fight, yeah, give me last-minute stuff, whatever. You can weigh that out. But for the championship? I wanted to be prepared and I wanted to win, and neither of those options were as easy. And I’m not saying that Jon wouldn’t have steamrolled him, but I like to win. I like to get in there and be prepared, so really, that’s what it was. Eight days, for the title, lack of preparation for a somebody we’ve never even game-planned against.”

Following the cancellation of UFC 151, the public backlash was particularly harsh with Jackson and his fighter coming under fire. Asked about being vilified by the public, Jackson believes that was all Dana White’s doing.

“The public reaction is dictated by Dana and Joe [Silva]. So if Dana and Joe come out go, “X,Y, and Z, it’s not a big deal, we’ll have the next fight for you guys, yada, yada, yada,” then people would be sad and disappointed, but there wouldn’t have been that kind of reaction. I guess Joe didn’t have that much to do with this one. Dana just did what Dana does sometimes, which is go hard in the paint. And that’s where the public reaction came from.“

“There’s always some backlash from the fans. The more successful you are, the more backlash you’ll get. So yeah, for a while, everybody was yelling “sport killer” and stuff, but I just found the whole thing funny. “What the hell are you talking about?” It was really absolutely ridiculous to me at the time. Not taking one fight is not going to kill the sport. Even if they cancelled one card, what are you talking about?