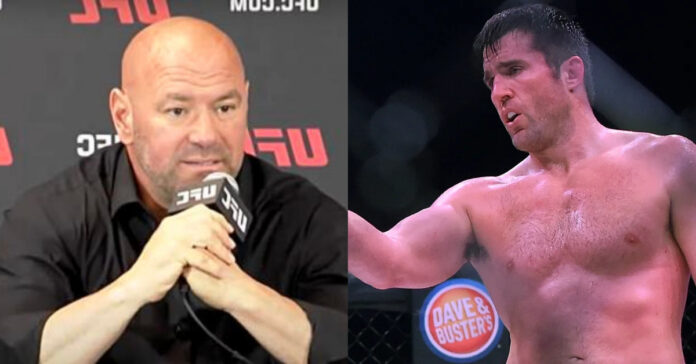 Edwards recorded a huge upset when he dethroned the former UFC welterweight champion and pound-for-pound king Usman in the main event of UFC 278. Usman was on his way to getting the nod by unanimous decision when Edwards blasted him with a vicious head kick in the last minute of the fight.

Sonnen took to his YouTube channel to share his thoughts on the shocking win for only the second English UFC title holder ever.

“Leon cheated in that match a whole bunch of times,” Sonnen said (ht MMA Junkie). “That is not a headline or a topic that is out there anywhere. … Leon was frustrated in positions and had no way out of positions to the extent that he cheated repeatedly. Not once – not an accident, not the ref didn’t see it. The ref saw it, the ref warned him, the ref saw it again, the ref stepped in, the ref broke the action five and six times.

“Kamaru Usman is very likely to smother you and change you when he is on top of you. He is most likely to finish a fight from that position particularly when he has you pinned up against the fence. Kamaru did three times. Leon changed the position and got out of that three times by cheating.”

During the Dana White Contender Series 52 post-fight press conference, the company president got asked about Sonnen’s comments. He did not agree with Sonnen and stated it would be ‘unfair’ to Edwards to make such a claim.

“He became champion with a head kick,” White said. “He didn’t win by grabbing the fence. I mean, he got absolutely dominated in that whole fight except for that couple of minutes in the first round. He got absolutely dominated, and you know, that’s completely unfair of Chael Sonnen to say that. That kid sucked it up, dug down deep and landed literally the perfect head kick with like a minute left in the fight. So I would say that that’s silly, ridiculous and absolutely unfair to say about Leon.”