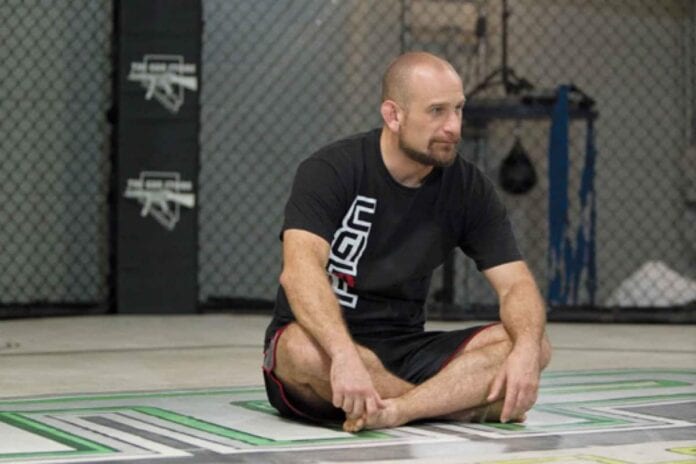 Greg Jackson was born in Washington, but he was raised in Albuquerque, New Mexico. He came from a family of champion wrestlers, but he was a bit of a black sheep of the family.

His family lived a rough part of Albuquerque and Greg would constantly have to fight at his high school. For his protection, he started training, Judo and learning a bit of kickboxing to go along with his wrestling.

Once he graduated from high school, Greg would open his own martial arts school. Teaching a style of martial arts that he came up with called “Gaidojiusu.” A mix of catch wrestling, Judo, and kickboxing. Basically a form of MMA.

At 17 with his own gym, he really didn’t have any aspirations of coaching fighters. It was basically just to teach his friends different street self defense techniques.

Teaching out of his backyard for whoever wanted to learn. Since what he was doing was unique it started getting a little buzz in his neighborhood. Slowly his gym began to grow.

Greg Jackson actually never wanted to be an MMA coach. At first, he just wanted to teach street self defense, but as MMA was growing, he took a different route.

His students started competing in early MMA and grappling competitions and wanted Greg to prepare them. They had immediate success early on and they just kept building the gym up.

Jackson MMA started winning all of the regional MMA titles and then the King Of The Cage titles. Then when the UFC’s popularity started to surge people started to take notice of Jackson MMA.

After a few seasons of The Ultimate Fighter, fighters from the show started coming to Albuquerque. Little did Greg know, what he was building would become an MMA empire.

By 2007, Greg had built one of the biggest MMA fight teams in the world. Though, with his team getting bigger, he would look for a little assistance.

He would bring in his friend and former professional kickboxer Mike Winkeljohn to teach striking classes. It would prove to be an effective combination as their fighter’s abilities skyrocketed.

So much so that Jackson made Winkeljohn a partner in the gym. Renaming the gym from Jackson MMA to Jackson-Wink MMA.

Greg Jackson’s fighter gave their coach the nickname “Yoda” and it is a name he lives up to. He is viewed as one of the most intelligent and wise coaches in the sport.

His knowledge far exceeds MMA as he is an encyclopedia of knowledge. Everything from history to advanced mathematics, and psychology .

He uses his knowledge to mentally coach his athletes and get them in fighting mode. Pushing them mentally as well as physically in the gym.

From 2006 to the present, Jackson’s gym has had a continuous stable of the best fighters in the world. They routinely have multiple top 10 fighters from every weight class in the gym. Including numerous UFC champions.

On any given day, you could’ve seen Rashad Evans, Nate Marquardt, Keith Jardine, and Jon Jones training together.

Those were just middleweights to light heavyweights. It was normal to see fighters like Donald Cerrone, Clay Guida, Leonard Garcia, and Diego Sanchez on the mat together.

There are so many high level pros training there, that they have had to separate pro classes and normal classes.

Greg Jackson has probably trained around a thousand fighters in his near 30 years of coaching. Here are some of his most notable students.

In that time, he was considered one of the best P4P fighters on the planet. With highlight reel knockouts of Chuck Liddell and finishing Forrest Griffin to win the title.

Rashad was later recruited by the Blackzillians. Though in his time training with Jackson, Evans was the best light heavyweight in the world.

Donald Cerrone was another one of the original Jackson MMA fight team from 2006. He moved to Jackson’s after appearing on the reality show Tapout and became a household name.

Going from the WEC, then debuting in the UFC in 2011. Cowboy became a household name, while training at Jackson’s.

Unfortunately he had bad blood with Winkeljohn and like Rashad Evans left the gym.

The most known and prized fight from Jackson-Wink is arguably the GOAT of MMA Jon Jones. Jon has been nearly unbeatable in his 14 year career. Hardly ever getting hurt and dominating almost every single one of his fights.

Winning the UFC Light Heavyweight Title multiple times and retaining it a record number of times. He is probably the best fighter to have ever come out of Jackson- Wink MMA.

No other MMA coach in the world has the record of success that Greg Jackson has had. Numerous UFC champions and considered by many to have the best MMA gym in the world.

Not only did Jackson make a world renown MMA gym, but he also brought up a city. Because of Greg Jackson, Albuquerque, New Mexico has become a mecca for many fighters and aspiring fighters.

Thousands of fighters flock to Albuquerque every year to train with Jackson at his gym. The city of Albuquerque is considered a fight in the US, where numerous if the world’s best fighters live and train.