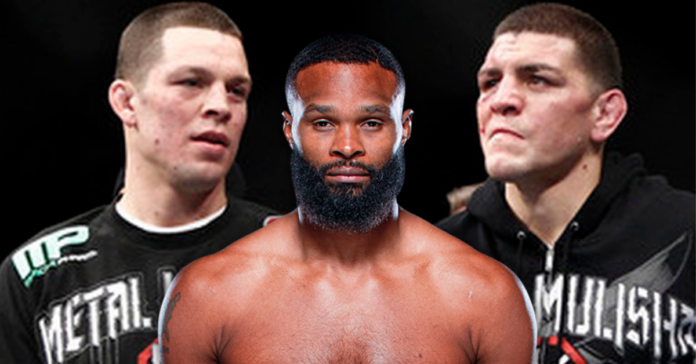 Former UFC welterweight champion Tyron Woodley says he wants Nick or Nate Diaz in a match. The Stockton-born Diaz recently had his final fight in the UFC when he defeated Tony Ferguson in the main event of UFC 279. As Nate has fought out of his UFC contract, he is now a free agent.

‘The Chosen One’ has taken some boxing fights since parting ways with the UFC in 2021. The former UFC titleholder has sustained two consecutive losses to YouTuber and boxer Jake Paul. Now, Woodley says, he wants The Ultimate Fighter season 5 winner Nate Diaz.

In an interview with MMA Junkie, Tyron Woodley said:

“Nate Diaz, I would tell him he a boss, he a ‘G. He did what he needed to do. I think the fight against Tony Ferguson was a fight he should have had anyway. Sometimes karma and sometimes things work out the way they supposed to work out.”

Nate Diaz has had no official word on what he will be doing next, whether competing in another MMA organization, boxing, or even professional wrestling, but Woodley offered some advice to the new free agent. He explained:

“I would suggest he go and get paid top dollar. I would suggest that he do what makes him feel good, if he still wants to do it, when he wants to do it. That’s what I’d suggest – and I suggest he come over on this side and make some money with me, because I got a good opportunity with me and Nick or Nate, or both of them, (we) can make quite a few millions of dollars fighting each other.” [Transcript courtesy of MMA Junkie]

Nick Diaz is still under contract with the UFC for now. His most recent fight was a loss to former welterweight king Robbie Lawler in 2021. But the other Stockton son is free to take whatever opportunity comes his way. Woodley did not specify whether he was interested in boxing Diaz or meeting them in an MMA cage. But, he said, it’s time for these brothers to start making some money.