LowKickMMA.com
Home UFC News Tony Ferguson Says its “Not The Time” To Train With Charles Oliveira... 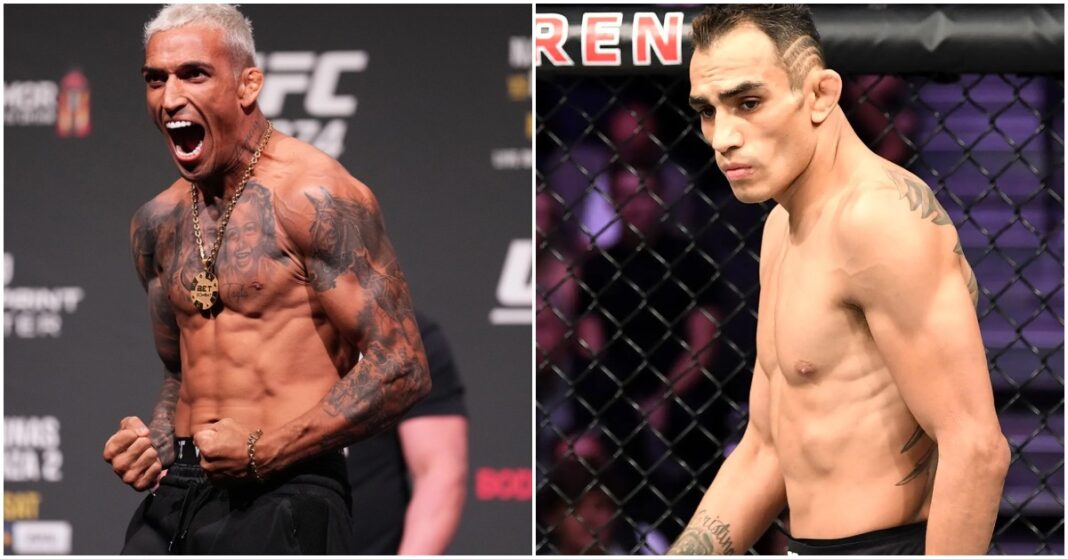 UFC lightweight Tony Ferguson has stated that it’s ‘not the time’ to take up Charles Oliveira’s offer to train together but seems to have huge respect for the current champion.

Ferguson is coming off a devastating loss to Michael Chandler at UFC 274, where ‘El Cucuy’ would end up being knocked out with a brutal front kick.

Despite the loss, Tony Ferguson is in good spirits, and, during recent media appearances, seems to have found the silver lining of the situation. The former interim champion stated in an interview with MMA Junkie that he plans on making significant changes for his future camps, which was actually inspired by Oliveira’s offer to train together.

Ferguson and Oliveira fought one another in December of 2020 at UFC 256, where Oliveira would defeat Ferguson by decision. Although former foes, the respect between the pair seems to have blossomed with Ferguson competing on Oliveira’s last two undercards.

“I have to really reflect on what he said, because Chute Boxe is a very good school,” Tony Ferguson said “But he is in my weight class. I’m one of the only fighters that he hasn’t finished, and I went into that fight practicing zero jiu-jitsu. I didn’t do too bad. I didn’t do as bad as Dustin Poirier just sitting there laying there. I stayed active and I went for submissions everywhere. It’s not like I practiced really hard.”

“I’ve got to really think about that one, because I see myself competing against him again”, Ferguson continued. “No animosity, but I went back there and talked to him before the weigh-in faceoffs. I told him, he was signing posting, and I walked up to him, put my hand on his shoulder and I said, ‘Hey, kid. You stay focused, all right?’ He turned around and he looked at me and he knows already.”

“But I know right now that it’s not the time for me to go to Chute Boxe and to train with them. There’s some local gyms out that I’m going to be part of a team and help that team grow as well as myself”, Ferguson said.

The loss to Chandler was Fergusons’ fourth in a row, but the 38-year-old seems as determined as ever to keep fighting. There was obviously great concern from many around the MMA world following the dramatic loss, but to hear the fan favorite, Ferguson, sounding so positive will be a relief.

Do you think Tony Ferguson should train with Charles Oliveira in the future?