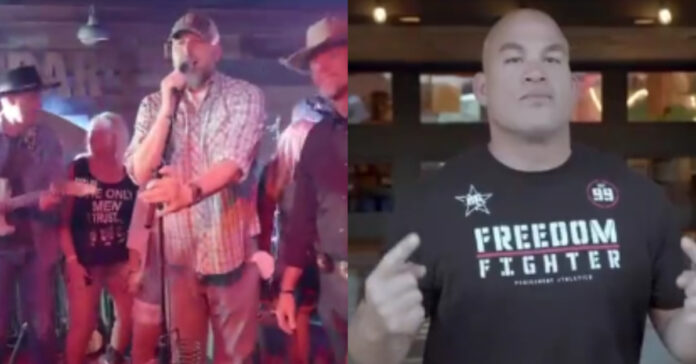 After Tito Ortiz‘s brief and fairly disastrous career in politics, the former UFC light heavyweight champion is giving the music industry a try.

Ortiz, a UFC Hall of Famer, will appear in the mildly-anticipated music video for rising county music star Josh Scott’s newest single, Redneck Enough to be Dangerous. The full music video will be released on October 14th, but thanks to @FullContactMTWF on Twitter, you can get a brief glimpse of the lyrically dense material below:

Sure enough, users on Twitter have been blasting Ortiz’s participation in the video with one Twitter user saying, “When you have to fill out a 500 word essay but only have 15 words in your brain. That’s this song. Also Tito looks like the guy who just got to the bar and is just now coming off his PCP binge trying to make sure his emotions are authentic reality.” Harsh, but fair.

Once a respected combat sports superstar and one of the hottest selling acts in the business, Tito Ortiz has fallen from grace, particularly after his poorly received foray into politics. In 2020, Ortiz ran for a city council seat in his hometown of Huntington Beach, CA. Elected to an open seat on November 5th, 2020, it took the ‘Huntington Beach Bad Boy’ less than a month in office to orchestrate and lead a protest against COVID-19 regulations.

Six months later it was revealed that Ortiz had filed for unemployment in the state despite not being unemployed. He resigned from the position one month later. With his political career over less than a year from when it began, Tito Ortiz appears to have found a new job, randomly appearing in low-budget country music videos on the internet.