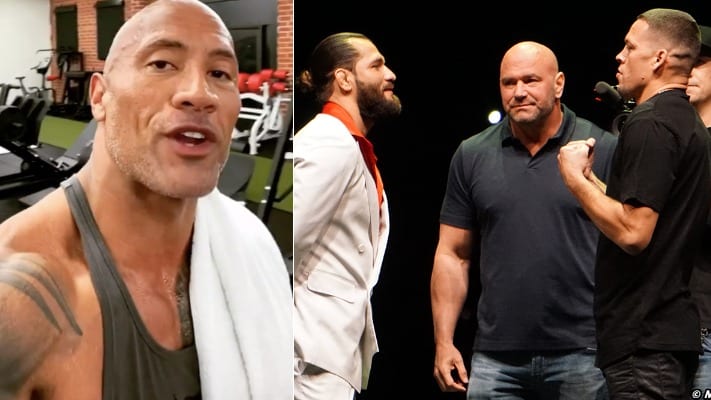 All the stars will be in attendance for this weekend’s UFC 244 pay-per-view (PPV) bout between Jorge Masvidal and Nate Diaz. The fight will crown the UFC’s Baddest Mother F*cker Champion, with none other than WWE legend and Hollywood star The Rock wrapping the belt around the winner’s waist.

The Rock, real name Dwayne Johnson, will make a big announcement tomorrow during the UFC 245 press conference. He will also be in attendance to watch Masvidal vs. Diaz before awarding the winner the BMF Title. Days out from the event, Johnson took to Instagram to hype the PPV with a video promo. Check it out here.

“Biggest & BADDEST @ufc fight of year this SATURDAY. @gamebredfighter VS @natediaz209 for the BMF Title. Nothing but respect for these two OG’s who are gonna light up and electrify Madison Square Garden, as only bad MF’s can.
Looking forward to wrapping the title around the winner. Gonna be a wild, fun and historic night. You do not wanna miss this fight.”

Johnson isn’t the only big name that will be at UFC 244. United States President Donald Trump is also scheduled to be in attendance, a move Masvidal has offered his thoughts on in a recent interview.

READ MORE:  Dan Hardy Has Signed A Contract To Box Tyron Woodley In The UK

What do you think about The Rock coming in to wrap the BMF Title around the winner of Masvidal vs. Diaz?