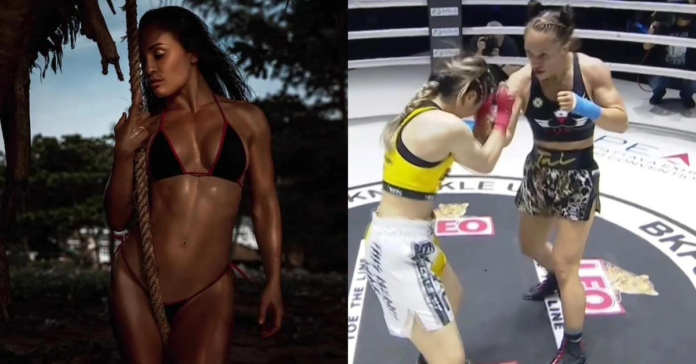 Earlier this year, Australian bare-knuckle fighter Tai Emery created one of the biggest viral moments in BKFC history. She earned an incredible first-round knockout win and to celebrate she jumped on the ropes and flashed the audience.

BKFC Asia CEO Nick Chapman explained that he got in a lot of trouble for this. The BKFC founder and CEO David Feldman and the Thai Sports Authority both got Chapman in hot water. BKFC was forced to give a statement of apology and pay a fine. The fine, according to Chapman, he would gladly pay again.

In an exclusive interview with Tim Wheaton of LowKickMMA, Chapman said:

“Tai Emery is an absolute legend … She just expressed herself in the way she felt at the time.”

Nick Chapman also revealed the name and date of Tai Emery’s next opponent. The BKFC Asia CEO announced to LowKickMMA that Emery will be facing Po Denman on December 10.

“What I will tell you the woman she’s fighting on the next event is a bare-knuckle veteran … She is the only woman to ever knock out a man in a legitimate bare-knuckle fight. She fought a guy and knocked him out … That is going to be one badass fight. So Tai, as you know, she can fight.”

See the full interview with Nick Chapman the BKFC Asia CEO below:

Thailand’s Po Denman is a dangerous opponent who is currently on a nine-fight win streak in boxing. She will be making it ten in a row but standing in her way will be the knockout queen Tai Emery.

Emery has lived a highly interesting life. Currently, this Australian-born athlete is living in Thailand and competing in bare-knuckle boxing, but previous to this she held jobs as an electrician, thermographer, and Lingerie Football Player. She loves BKFC because of the skin-to-skin contact it offers. While speaking in an interview with Calf Kick Sports, she explained:

“With BKFC it is so raw … I guess wearing gloves it takes something away. Like, there’s something so raw when all of a sudden I don’t have to have gloves … I think yeah having that grip and just like skin-to-skin contact is such a crazy, crazy thing.”