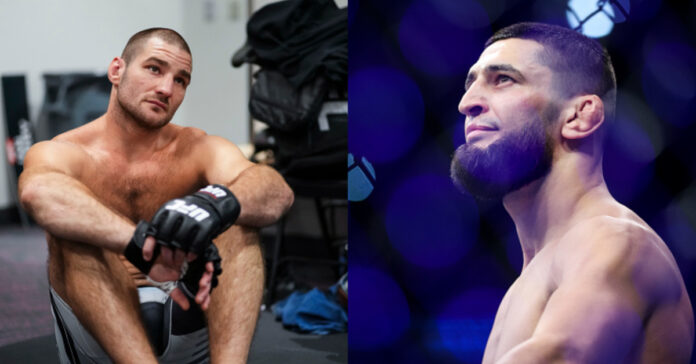 Fast-rising welterweight star Khamzat Chimaev is rounding the highest profile fight of his relatively short UFC career. On September 10th, the Chechnyan-born fighter will get his first main event against Stockton’s own Nate Diaz.

In a recent video clip by Youcef Hollywood that was uploaded to the UFC on BT Sport Twitter, Chimaev can be seen at a gym with none other than No. 7 ranked UFC middleweight, Sean Strickland. In the clip, Strickland can be seen and heard warning another teammate about sparring with ‘Borz’ before turning his attention Swedish star offering both words of encouragement and a bit of a warning.

Debuting for the promotion in 2020, Khamzat Chimaev went on an absolute tear, scoring three impressive finishes in less than two months. His momentum was briefly halted due to an especially tough bout with COVID-19, but ‘Borz’ made a full recovery and returned at UFC 267. It was like the massive welterweight had never left. In his return contest, he demolished Li Jingliang with a first-round rear-naked choke.

Ready for a big step up in competition, Chimaev stepped into the Octagon against former world title challenger Gilbert Burns. It was by far the biggest test of his career. ‘Borz’ passed the test, securing a unanimous decision victory, but not without having to overcome some adversity in their UFC 273 clash.

Nate Diaz‘s contract disputes and his overall desire to be done with the UFC have been widely publicized, mostly by The Ultimate Fighter alumni himself. After months of lobbying to schedule the last fight of his contract, the Stockton scrapper finally gets his wish, but many feel that the UFC is simply leading Diaz to the slaughter by pairing him with Khamzat Chimaev.

Of course, anything is possible in mixed martial arts. Our most recent example of that was at UFC 278 when Leon Edwards delivered the head kick heard around the world to become the new welterweight world champion. While a rematch with former champion Kamaru Usman is a near-certainty, ‘Rocky’ has gone on record saying that if Nate Diaz wins this fight, he would gladly give the fan-favorite fighter a crack at his newly won UFC gold.

While UFC President Dana White previously stated that a win for Khamzat Chimaev would put him in pole position for a welterweight title opportunity, the boss recognizes they may have to look at giving Diaz his moment should he score what many would believe would be a major upset.

“I mean, obviously, if Nate beat Khamzat Chimaev, the No. 3 guy in the world, you’d have to look at Nate, too. Everybody’s talking … like that it’s impossible for Nate Diaz to win this fight. Nothing is impossible in fighting. Everything is possible,” said White in an interview with ‘The Underground.’

“Nate Diaz wanted this fight. It was either this fight or Francis Ngannou. This fight makes a lot more sense than Francis does. But, you know, for everybody to think that a veteran who’s as durable as Nate Diaz can’t win this fight is insane, so anything is possible. … You get out of the first two rounds and the fight gets interesting.”