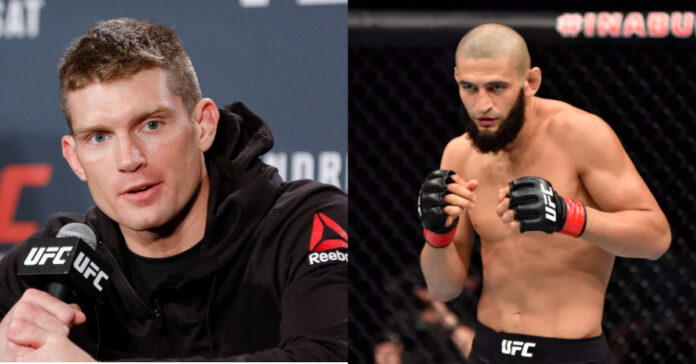 Stephen Thompson has shared his belief that undefeated title contender, Khamzat Chimaev, would be better suited to compete at middleweight but admits a rumored matchup with Colby Covington would make for an exciting affair.

Thompson’s claim comes after Khamzat Chimaev horrendously missed weight at UFC 279 and subsequently was removed from the main-event matchup with Nate Diaz. A quick card shuffle saw Chimaev then matched up with Kevin Holland in the co-main event slot who he would submit inside the first round.

Speaking to MMA journalist James Lynch in a recent interview, Thompson gave his reasoning on why he feels Chimaev should move up a weight class but also shared his excitement for the speculative matchup with Colby Covington which is rumored to be occurring at UFC London in 2023.

“From what I hear, he’s a very strong welterweight,” Stephen Thompson stated.

“Don’t take anything away from Kevin Holland after that fight. I mean, it was a days’ notice. Fighting somebody as big and strong and wrestling savvy as Chimaev, I thought he held his own right there in the first round. A lot of crazy scrambles.”

“He’s very scrappy on the ground. He really is; Kevin is. Which was kinda messed up, he goes in to give him a high five and he [Chimaev] shoots right in for the legs, ends up taking him down. I’m like, oh, come on, man. Should’ve just gave the guy a high five.” (Transcribed by BloodyElbow)

Given Chimaev is currently ranked third in the welterweight standings and a potential title eliminator with Colby Covington speculated to be on the horizon, it seems unlikely that ‘Borz’ will be wanting to jump divisions anytime soon.

However, in the future, this could be a very likely possibility with his fighting style being seen as problematic for the current middleweight champion, Israel Adesanya.

Do you agree with Stephen Thompson’s opinion on Khamzat Chimaev?