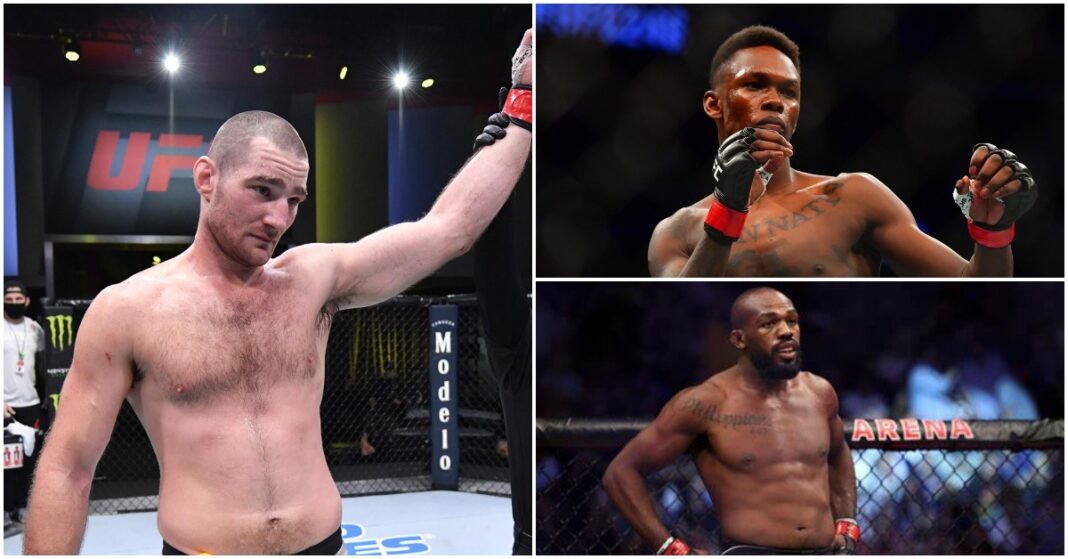 Sean Strickland’s stance on fighters using performance-enhancing drugs is pretty clear, ban them for life. Strickland took special aim at both Jon Jones and Israel Adesanya, especially Jones who has a history of this as well as failed drug tests.

The UFC middleweight Contender even said that Jones’ legacy is now obsolete because of his usage of banned substances.

Strickland spoke to Helen Yee in a recent interview to discuss the impact banned substances can have.

“I think Jon Jones could’ve been the greatest fighter to ever walk in the UFC. I mean I grew up watching Jon Jones but after he got popped it’s clear that he was juiced. I don’t think he should ever be allowed to fight again; I think his legacy is gone, I think everything he’s ever done in the UFC should be replaced because again if you’re cheating and you’re getting an advantage how do you hold a legacy you know when you didn’t do it on even playing field.”

Strickland then turned his attention to middleweight champion Israel Adesanya as rumours had also previously circulated around ‘Stylebender’ in the build-up to his grudge match with Paulo Costa.

“I just think that if you get popped for steroids, lifetime f**king ban. And again, if it’s a tainted supplement, I get that but if you’re juiced like f**king Izzy [Israel Adesanya], Jon Jones it should be a hands down lifetime ban.” (Transcribed by sportskeeda.com)

Israel Adesanya was cleared of any potential wrongdoing and himself claims the effects could have been caused by the consumption of marijuana, but Strickland ain’t buying it.

“We’ve all seen him fight with a t*tty that hung down. I mean, have you ever seen a man fighting in the UFC with gyno, from weed? I mean, look at Nate Diaz, if that was the case Nate Diaz would have t*ts down to his knees.”

Strickland may have to deal with Adesanya sooner rather than later, ‘Tarzan’ is currently riding a five-fight winning streak, and a victory in his next outing on Jack Hermanson scheduled for February 5th could be just the calibre of opponent Strickland needs to beat to earn himself a shot at the title.

What more could be done to prevent the use of PED in combat sports?