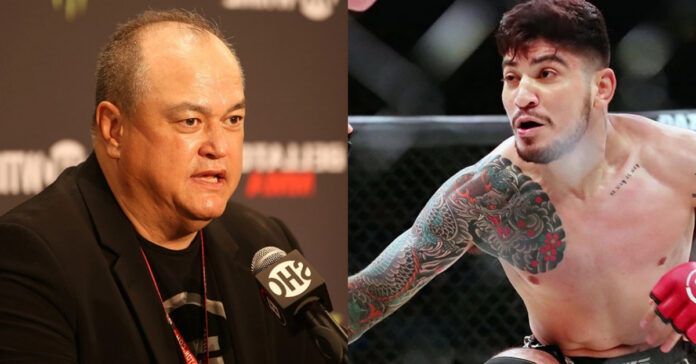 Scott Coker is willing to give Dillon Danis the opportunity but he is not sure if he wants it.

Bellator president Coker signed Danis after the latter gained notoriety for his work in jiu-jitsu tournaments and became a training partner and grappling coach of Conor McGregor. Since bringing him to Bellator, Coker has managed to only book Danis twice. With zero outings since 2019, Coker doubts whether Danis will ever return.

During the post-fight press conference for Bellator 285 in Dublin, Coker shared his thoughts on signing Dillon Danis.

“Dillon is a kid we had a lot of high hopes for,” said Coker (ht MMA Fighting).

Danis arrived as a highly promising talent that could have a strong future in MMA given his affiliation with ‘The Notorious.’ However, a string of injuries saw him kept on the sidelines. Danis regularly made headlines over the past few years, but instead of the attention being for his fighting abilities, it was instead for his public disputes with fellow athletes or icons of the game.

READ MORE:  Paddy Pimblett predicts first round win over Jared Gordon at UFC 282: 'He's just not on my level'

Danis is a decorated Brazilian jiu-jitsu professional with appearances in numerous high-level competitions. As many fans as he may have, Danis also has plenty of haters who are not too appreciative of his antics, including former UFC middleweight champion Michael Bisping.

Coker is willing to give Danis another opportunity but only if he is serious about taking it.