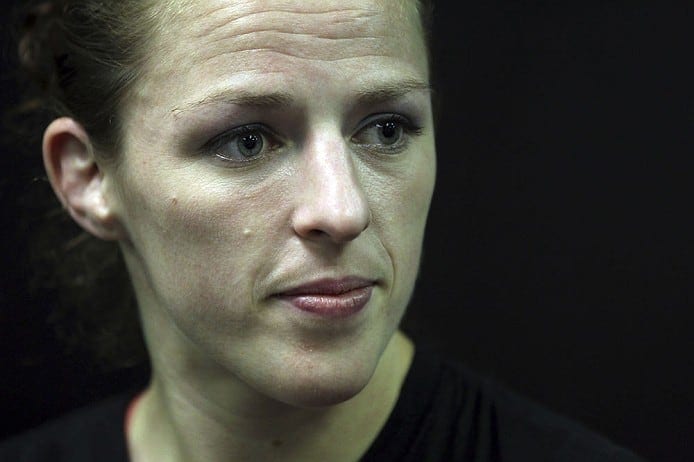 UFC women’s bantamweight contender Sarah Kaufman is now four fights removed from her 2012 Strikeforce loss to current champion Ronda Rousey, with a 2-1 (1 NC) record for the UFC. With an impressive overall tally of 17-3 (1 NC), and even with her recent UFC 186 loss to Alexis Davis, another win could put her in title contention in the inherently contender-light 135-pound division.

With the recent revelation of Ronda Rousey vs. Holy Holm at UFC 195, the division seems to have exploded in to pockets of feuds and beefs. With Bethe Correia campaigning for a fight with just about anybody since her UFC 190 loss to ‘Rowdy’, and Miesha Tate/Amanda Nunes potentially facing off, the Canadian Kaufman is giving her fair share of call-outs now too.

Check out what she told Mike Bohn of MMAJunkie:

“I’m hoping I get Bethe (Correia) or Miesha Tate or Cat Zingano.”

On to the undisputed champ Rousey:

“Ronda is who she is; she’s proven herself to be a phenomenal athlete, and this fight is pretty interesting if you look at she just knocked out Bethe (Correia) – Holly is an amazing boxer, she’s southpaw. I train with Holly and she’s fast, she’s powerful and she picks things up fast. I want to stand behind my teammate. It’s almost impossible to say she’s going to come out with the win, but I do think Holly has the ability if she comes in and fights the right plan to make it a very tough fight and potentially get that win. I want to stand behind her.”

Having trained with Holly Holm in the past, Kaufman may be best placed to make a prediction on who will win at UFC 195. She wasn’t always in this position though, as she claims that the UFC wanted to make Kaufman vs. Holm for the ex-boxer’s next MMA fight:

“It was funny when I first got the call to fight Holly I was like, ‘Really, Holly?’ We’re good friends, we’re teammates and this fight I personally didn’t think it made a ton of sense with her being ready to go towards a title shot and me just coming off a loss,” Kaufman said. “It was a fight that we didn’t really know what to think about. I said, ‘Well, it’s a fight and it’s going to be a good fight and we can be friends after and make a fight that fans are going to be like, “Hell yeah, we love that fight.”‘ So we decided, ‘OK, we’re going to take it – sounds good. Holly is going to take it and everything is good.’

“I wake up Friday morning at get a text at 5:45 in the morning saying, ‘So, it’s not happening?’ Then sure enough, I go online and everything is abuzz and Holly is now fighting Ronda. At this point, I’m excited for Holly to get a title fight, I’m excited that I don’t have to fight a friend if I don’t have to, but disappointed I don’t currently have a fight.”

There has been some criticism of the UFC booking Holm and Rousey, and to hear that it not only deprived Miesha Tate of her trilogy maker, but also Kaufman of her next opponent may fuel those negative perceptions.

Stay tuned to LowKickMMA for more UFC booking news, as the women’s bantamweight division clearly has a few more to come.