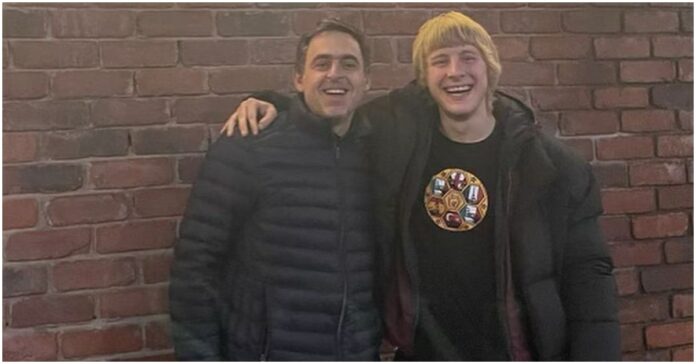 Snooker legend Ronnie O’Sullivan is ready to get some sparring rounds in with Paddy Pimblett.

‘The Baddy’ was pictured on Wednesday cheering for O’Sullivan as he beat Mark Williams 10-9 in the Tour Championship quarter-final. Earlier this month, the Snooker icon was front row as Pimblett picked up his second UFC win by beating Kazula Vargas at the O2 Arena in London.

It appears the two men have struck up a friendship that has resulted in Pimblett inviting O’Sullivan to train with him.

“I am definitely going to try and do some sparring with him, when I next go to Liverpool he has told me I have got to get in the cage,” said O’Sullivan via The Express. “And I am well up for that, it is all fitness.

“I went to Paddy’s last fight in London at the O2 with Damien Hirst, because he is a huge fan of UFC and knows the big bosses. We were sitting front row watching Paddy and Molly McCann too, and it was a great night. I have got to know Paddy over the last few weeks. He is a super, lovely guy and is going to be a real superstar – well, he is already really, but he is going to be mega, he has that X-Factor.

“What I like about UFC over maybe even the boxing is that you will never get an easy route,” O’Sullivan said. “You have to fight whoever they say you are going to fight. In boxing there is a lot of politics involved, and fighters get to fight certain fighters and avoid certain fighters. So the public can be frauded that some are better than they really are because they avoid the real, proper fights.

“But in UFC that doesn’t happen so much, they know that if they want to be the guvnor then they have got to fight each other. That’s the one thing I really like. It was just an amazing atmosphere at the O2, with 17,000 people and Paddy had the place rocking, he was the star of the night along with Molly. He just has an aura, everyone is talking about him. It was weird, my son was like ‘You went to the UFC, Paddy’s a legend’ and he loved it when I sent him a picture of us.”

What do you make of the budding bromance between Snooker legend Ronnie O’Sullivan and the UFC’s newest star Paddy Pimblett?