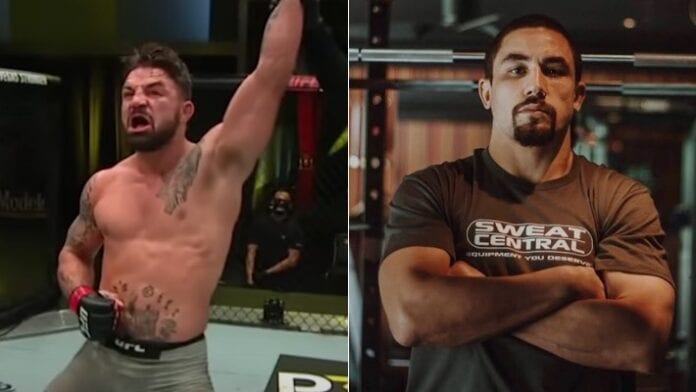 Whittaker: Perry Could Have Success Moving Up

Perry returned to the win column at UFC Vegas 4 this past weekend with a dominant unanimous decision victory over Mickey Gall in the co-main event. Afterwards, he spoke of moving up to middleweight to settle his ongoing beef with Darren Till.

Till, however, faces Whittaker next when they collide on July 25 in Abu Dhabi’s Fight Island. Till recently moved up to middleweight last year while Whittaker is also an example of a welterweight who moved up and actually became champion at 185 pounds.

And “The Reaper” believes Perry has all the tools to succeed at a higher weight class.

“Definitely he can find success. He’s a tough guy, man,” Whittaker told Submission Radio. “Every time I watch him, he surprises me, honestly. Because even that last fight, he wasn’t faster than Mickey Gall, but he looked like he just like… everything Mickey Gall threw at Mike, Mike just could handle it. He’d sprawl out of the shots, he’d counter with his own shots, when he got on top, he did damage. And he must hit hard. I assume that’s his ace, because there’s gotta be a reason why – well, given that he’s tough as nails, but he must hit bloody hard.

“I’m trying to crack the enigma of why Mike Perry is as successful as he is. But yeah, I definitely think just with him being tough and hitting hard and having that decent well-rounded skillset, like, I’m sure he could have success moving up.”

As for Perry’s controversial decision to have his girlfriend be his sole cornerman for the fight against Gall, Whittaker has no problem with it even though he did find it to be weird.

After all, if “Platinum” is happy with it, there is no reason to change things up.

“Nah, nah, even she thought it was a little weird (laughs),” Whittaker replied when asked if his wife will now corner him for his fight with Till. “Do your thing. If he likes it and he’s happy with it, why not. This is his ride and his journey, he can do it the way that he wants to. Why not.”

Do you agree with Whittaker about Perry?