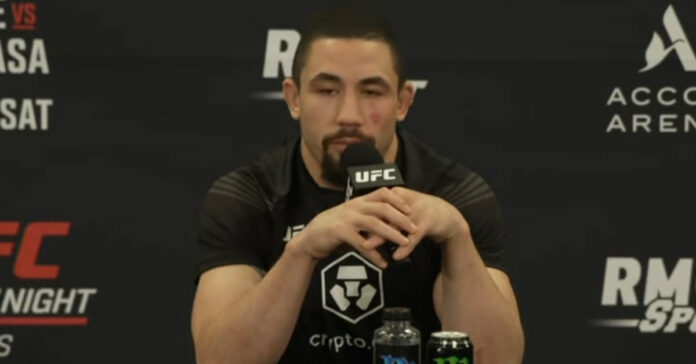 Robert Whittaker defends Israel Adesanya‘s past title defenses that have been called boring.

Whittaker had a very close title fight with Adesanya back in February of this year. Many fight fans and journalists believed that the fight was less entertaining than it should have been. Adesanya never tried to get anything really going, and fought a very defensive fight. Adesanya’s strikes came mostly from his leg kicks, while Whittaker was getting a few nice combinations going to the head.

Adesanya came up mostly putting on striking clinics against his opponents, but now he fights much more defensive, which isn’t a great way to keep fans engaged. Adesanya has been called the “Floyd Mayweather” of the MMA, with how he has fought recently. Adesanya is known as one of the best strikers of all time, and his defense is just another addition to how great of a striker he truly is.

Whittaker was asked at the post fight press conference whether he believes Adesanya is a boring fighter now, and answered swiftly and honestly.

“It depends what’s in the contract.” Whittaker answered. “You know, I’m pretty sure that he’s just paid to win. That’s the most important thing whether it’s boring, or not. It doesn’t matter if it’s ‘Fight of the Night’, or not if you lose.”

He also said that he never really worried about putting on an exciting fight. Whittaker claims that he was messed with an exciting fighting style. Whittaker has put himself back into title contention with the win over Marvin Vettori as he may be on the road to another title shot against Adesanya. Adesanya has to get through Alex Pereira, for there to be a trilogy match between Adesanya and Whittaker.

Do you think Robert Whittaker should get another title shot with his win over Vettori?