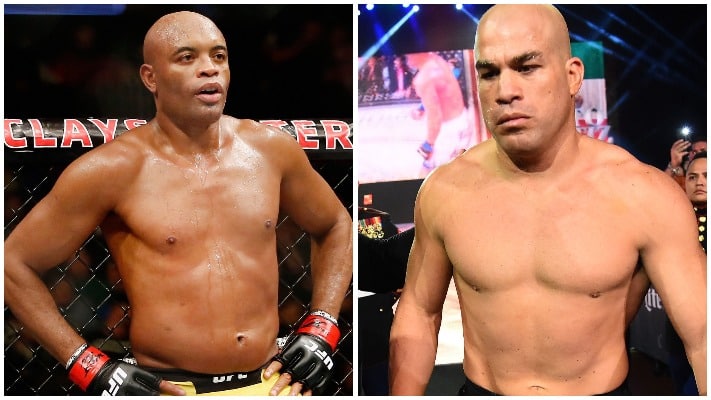 Anderson Silva and Tito Ortiz are set to square off in the boxing ring on September 11 according to a report from Guilherme Cruz of MMA Fighting.

After a rough end to his UFC career, in which he lost five of his last six fights, Silva is turning the page towards the next chapter of his fighting career despite being 46 years old.

‘The Spider’ enjoyed an impressive return to boxing when he outpointed former middleweight champion Julio Cesar Chavez Jr. in their eight-round boxing match in June.

Silva was believed to be working on a fight against YouTuber, Logan Paul, who is fresh off a mega-money exhibition bout against Floyd Mayweather.

Apparently, that fight is now off the table and Ortiz is the man Silva will next face in a boxing ring.

In June, the former UFC light-heavyweight champion announced his resignation from his position as Huntington Beach Mayor Pro Tem.

Ortiz recently took to social media to confirm his return to fighting and ask fans who he should fight.

A boxing match against Silva seemed far-fetched at the time but now appears to be coming to fruition.

The Triller Fight Club card will take place at the Staples Center in Los Angeles live on pay-per-view.

Oscar De La Hoya is set to battle Vitor Belfor in the main event of the evening.

Will you be watching Anderson Silva vs. Tito Ortiz on September 11?