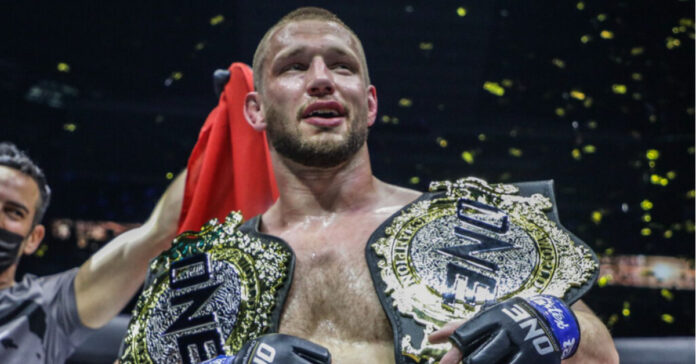 Reinier de Ridder earned his 16th straight victory in the main event of ONE 159 on Friday to remain the promotion’s two-division world champion. To close the show, ‘The Dutch Knight’ took on former middleweight world titleholder Vitaly Bigdash.

The opening moments of the fight had fans on the edge of their seats. ‘The Dutch Knight’ immediately took the center of the ONE Circle and began stalking Bigdash. 20 seconds into the fight, De Ridder initiated a clinch against the fence but exposed his neck in the process. Bigdash immediately sunk his arm in for a guillotine choke. Bigdash went all in, pulling guard and tightening his grip.

De Ridder’s face was noticeably changing colors, but the Dutchman was far from giving up. After 40 seconds, ‘The Dutch Knight’ was able to pull away from the attempted choke. From there, it was all De Ridder who postured up, looking to punish Bigdash before making his move. Dropping back down into Bigdash’s half-guard, De Ridder appeared to attempt a kimura. This caused Bigdash to scramble out of danger and momentarily reverse position.

Unfortunately for the Russian challenger, he left his head and arm wide open for an inverted triangle. Seeing the opportunity, Reinier de Ridder locked in the position. Ten seconds later, Bigdash was unconscious, and ‘The Dutch Knight’ was still ONE Championship‘s undefeated two-sport world titleholder.

Reinier de Ridder is Ready for a Third World Championship

Earning a $50,000 bonus for his ONE 159 main event performance, De Ridder was nothing short of direct when asked what he wants to do next in his post-fight interview with Mitch Chilson.

When Chilson translated that as ‘The Dutch Knight’ wanting to go for the heavyweight crown, he asked the Dutchman if he’d rather face reigning ONE heavyweight champion Arjan Bhullar or the current interim heavyweight titleholder Anatoly Malykhin.

“I want them both in the same night,” De Ridder said.

While no official date has been announced, Arjan Bhullar and Anatoly Malykhin are slated to face one another in a heavyweight title unification bout. Given his utter dominance, it would be hard to imagine that ONE denies ‘The Dutch Knight’ of going for a historic third world championship.