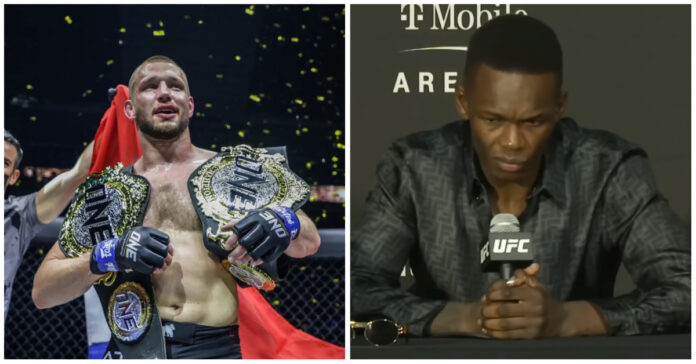 Dutch fighter Reinier de Ridder is set on getting a third belt before competing with Israel Adesanya.

Two-division ONE Championship king Ridder scored a major upset against former two-title holder Aung La Nsang to secure the middleweight strap in October 2020 at ONE: Inside the Matrix.

Considering how big of a shock the result was, some alleged the win to be a fluke. De Ridder would prove the doubters wrong when he stepped in on short notice to take on La Nsang at light heavyweight and defeated “The Burmese Python” one more time at ONE on TNT 4 in April 2021.

De Ridder is set to defend his middleweight strap against Vitaly Bigdash at ONE 159 this Friday. Ahead of his upcoming bout, “The Dutch Knight” talked to talkSPORT about his plans next.

Although he makes a solid case for going up to heavyweight and challenging the reigning champion Arjan Bhullar, he’s not sure if he’ll get the chance as Bhullar eyes a move down to compete against him.

“Is ONE [Championship] interested? I’m not really sure right now. Arjan [Bhullar] is not because he’s been talking about coming back down the light-heavyweight, which is also fine to me. I just wanna know that I can beat everybody and I just wanna show everybody,” De Ridder said. (Transcribed by Jordan Ellis/talkSPORT).

If De Ridder is able to prove his mettle in the Asian promotion up to his satisfaction, he will then target a move over to the UFC in hopes of a fight with Israel Adesanya. He talked about Adesanya’s lackluster performance in his last title defense against Jared Cannonier at UFC 276.

“It’s all show now, fighting is not the primary thing. I think he should get back to his roots, put his phone away, put the laptop away and start training again.”

De Ridder believes he has what it takes to hand Adesanya his first defeat at 185 lb in the sport.

“It’s not like, he does have power, but he doesn’t have one-shot knockout power, to be honest. You don’t need to be as cautious as most people are against him. You can eat a couple of shots before taking him down.

“I think it’s pretty possible. It’s something that might happen sooner rather than later.”

Would you like to see Reinier de Ridder fight Israel Adesanya?