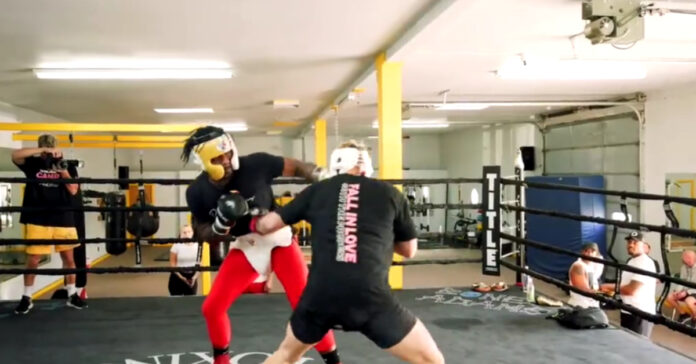 Previously scheduled Jake Paul opponent Hasim Rahman Jr. has leaked footage of a sparring session he had with the outspoken professional boxer amidst controversy surrounding their bout cancellation.

Originally scheduled to face Tommy Fury on August 6th, Jake Paul was expected to take on the first real professional boxer of his career after making a name for himself against YouTubers, retired NBA stars, and mixed martial artists. Unfortunately, the bout with Fury was called off after the boxer was refused entry into the United States. Stepping up to take his place is Hasim Rahman Jr. Sitting at 12-1 in his career, Rahman Jr. is a legitimate boxer with six career knockouts. It was a suitable replacement to give Paul the first true test of his boxing career, but once again, the fight was called off.

In response to the controversy and allegations made by Jake Paul, Rahman Jr. released previously unseen sparring footage between the two that shows the ‘Problem Child’ being clearly outclassed.

“This boy puts out what he wants to put out, but he ‘beat my ass’ in sparring. I told y’all I had the training wheels on with this goofy. The first opportunity he had to run from this fight he took it! Now he’s running to fight @ksi this boy never wanted no smoke.”

The Story According to Jake Paul

According to reports, the bout was originally scheduled to be contested at 200 pounds. In the weeks leading up to the contest, Rahman Jr. appeared to have a different plan. Rahman Jr. intended to enter the fight at 215 pounds after only losing one pound in the weeks leading up to the contest. The New York State Athletic Commission would not sanction the fight for any weight over 205 pounds leading to the cancellation. Jake Paul posted a video of his reaction following the official announcement by Most Valuable Promotions.

“This is not a joke. I am devastated, I can not f—— believe this,” Paul said. “This is just another case of a professional boxer, just like Tommy Fury, being scared to fight me. It’s as clear as day that these guys have been so unprofessional to work with, looking for any excuse to suck more money out of this event, to coerce us into doing things and, from the jump, I knew in the bottom of my heart that this guy didn’t want to get in the ring with me.”

In response to the accusations that Rahman Jr. was essentially ducking the fight by not making weight, the pro box staged his own unofficial weigh-in for the fight on Instagram. In the video, Rahman Jr. weighed in at 206.6 pounds. Jake Paul and the NYSAC had agreed to contest the fight at 205 pounds so Rahman Jr. would have still come in overweight for the contest, but not to the extent that Paul and his promoters had suggested.