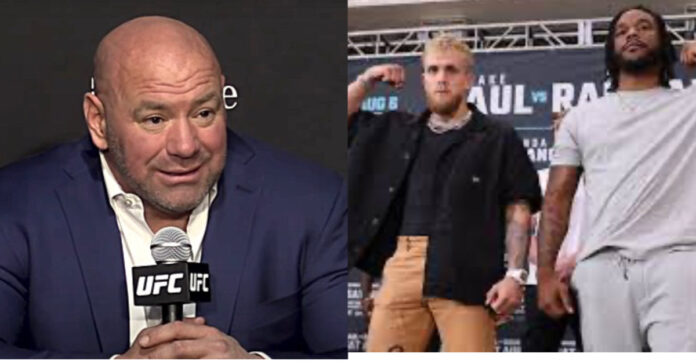 Dana White believes that the fight between Jake Paul and Hasim Rahman Jr. was canceled due to the lack of tickets sold.

The Paul fight was canceled just as the main card of UFC 277 started up. The fight was slated for next weekend at Madison Square Garden in New York, but was reportedly canceled due to Rahman Jr’s. weight. The promotion claimed that Rahman Jr. tried getting the match to be at 215 pounds, instead of 200 pounds.

Rahman Jr. claimed that Paul and the promotion wouldn’t even give him another week to try to cut the weight, even though his body was “telling him no” and cutting down to 200 wasn’t possible. He also brought up how fights in boxing are never called because of missing weight, especially a week out.

Rahman Jr. took to Twitter to call out Paul and claimed that the fight is being canceled because of Paul, not him.

Dana White skeptical on why the match has been called

“I think they sold under $1 million in tickets and it costs $500,000 to turn the f*cking lights on at MSG,” Dana White said. “That’s what I think. Not to mention hotel rooms in New York and transportation is very expensive.” White said in his post-fight press conference.

White also touched on how hard it is to promote a fight, explaining that just because former UFC CFO Nakisa Bidarian was around the UFC, doesn’t mean he knows how to promote well.

“Just because you were an accountant here doesn’t mean you know what the f**k goes on here and doesn’t mean you can run a fight promotion company. I think Jake Paul needs to get some different people around him. If he’s going to stay in the sport, he needs to be with guys that actually really know how to put on fights.”

As of now Paul’s immediate future and who he will be fighting next is still up in the air. What are your thoughts on Dana White’s comments?