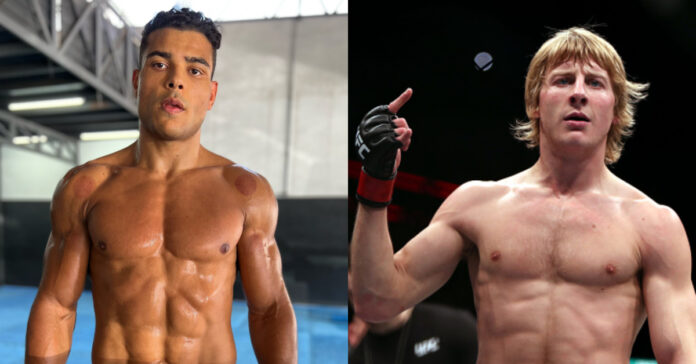 All eyes will be on Paulo Costa when he steps on the scale ahead of his UFC 278 co-main event. The Brazilian will welcome Luke Rockhold back to the Octagon after nearly three years on the shelf.

The last time Costa was in action, it was at UFC Vegas 41 when he faced former title challenger Marvin Vettori. Arriving at media day events ahead of the scheduled bout, Costa showed up weighing 211 pounds for the 185-pound middleweight contest. Knowing full well he wouldn’t make the necessary weight cut, Costa negotiated to move the bout to a 195-pound catchweight bout. Vettori agreed to the change, but then Costa once again requested the weight limit be moved once again, this time to 205-pounds.

It was a bad look for the man who had just admitted to downing a whole bottle of wine prior to his UFC middleweight world title opportunity against reigning champion Israel Adesanya.

Now Paulo Costa is back and admittedly looking good ahead of the co-main event clash. During his UFC 278 media day appearance, Costa was asked if he had gotten any weight-cutting tips from surging fan-favorite Paddy Pimblett.

“Yeah, he gave me a few instructions. Man, if you look for me and Paddy, it’s not a joke anymore. We have to cut a lot of weight in a short time. When I saw Paddy fight two weeks ago, I tweeted this I said man, this is a short time to cut that much weight, but he did it. He did great, and me as well! We know how to cut weight.”

While some within the MMA community have remained skeptical ahead of Paulo Costa’s return to the Octagon given his recent antics, the No. 6 ranked middleweight offered a guarantee that he would be on weight for his UFC 278 bout.

“Yes, I guarantee [he’ll make weight]. If you want to bet, I’ll bet. I can make the weight tonight.”

If his posts on Twitter are any indication, it appears that Paulo Costa is in incredible shape and ready to make another run toward the middleweight championship. First, he has to get through a former middleweight titleholder in Luke Rockhold.

“It feels good. It really does, you know. People like me, we thrive off this and these nerves and this test in life. It’s good to be back, you know. I’m not here chasing this one to the end. I’m doing this because I want to, not because I need to. There’s a sense of relaxation that I have in this time and I’m just ready to fight.