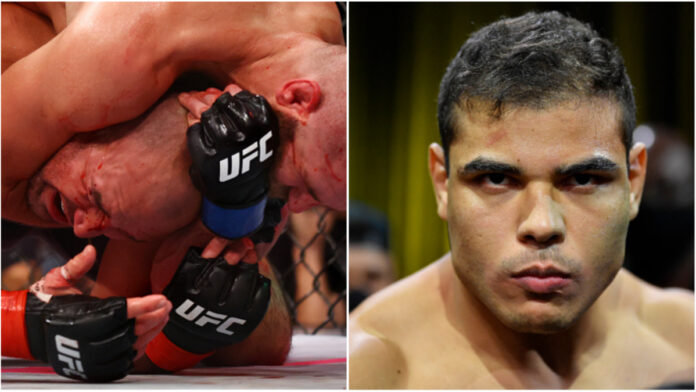 Love him or hate him, Paulo Costa is solidifying himself as one of MMA’s most controversial figures. From his most recent altercation where the young Brazilian allegedly elbowed a nurse over a vaccine card, to claiming the reason for his loss at UFC 253 was because the night before he drank too much wine, ‘Borrachina’ keeps landing himself in the headlines and let’s just say, it’s not for doing things that make himself look like a class act.

Before his fight at UFC 275, the former light heavyweight champion Glover Teixeira spoke his mind about his fellow Brazilian MMA fighter, Paulo Costa.

“I believe ‘Borrachina’ is too corrupted by Instagram and Youtube followers, maybe he wants attention to gain followers, like Jake Paul,” Teixeira told ESPN Brazil (transcribed by MMA Fighting).

Paulo Costa Gets Blasted By Glover Teixeira Ahead of UFC 275

“Honestly, look, he has more followers than me, right? Maybe that’s worth more money down the line, so who am I to talk? It that’s his goal, gain more followers and be the Kim Kardashian of Instagram, he’s on the right path,” Teixeira continued.

“Now, if his goal is to become champion, he has to leave the controversies aside and focus on training, diet, and what he wants… I’m not saying he’s right or wrong. If we’re talking about money and followers, he’s right. It’s not my goal to have followers. My goal was always to be the best fighter in the world. When I retire from fighting, I’ll delete all my social media and start over.”

Paulo Costa (13-2, 5-2 UFC) is preparing for one of his most legendary foes yet, Luke Rockhold. The fabled self-proclaimed Samurai Rockhold is coming back from a three-year layoff.

Costa has yet to comment on these insights from Glover Teixeira, but most likely he’s got bigger concerns. As he’s still dealing with the after-effects of the nurse situation and preparing for his previously mentioned fight with Rockhold, which is slated for UFC 278: a card to be headlined by reigning welterweight champion Kamaru Usman and Leon ‘Rocky’ Edwards.

What are your thoughts on what Glover Teixeira had to say about Paulo Costa?