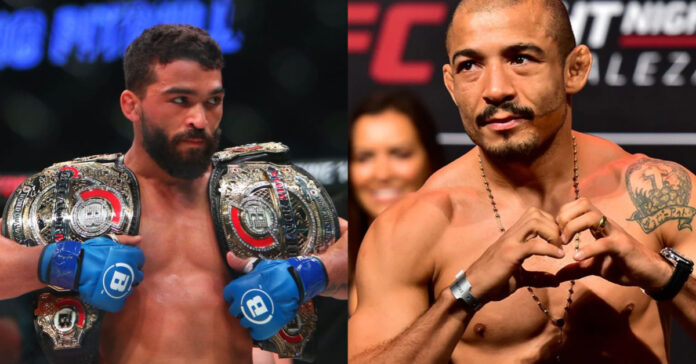 Patrício Pitbull (33-5 MMA) is now gunning for a battle of the Brazilians with Jose Aldo (31-8 MMA) to find out who is the best out of the featherweight champions, especially since Aldo is now retired and no longer under contract with the UFC.

Jose Aldo’s last UFC appearance was at UFC 278 where he squared off against rising featherweight Merab Dvalishvili (15-4 MMA).

Although coming into the event a betting favourite, the 36-year-old was unable to get his rhythm going as Dvalishvili was able to subdue Aldo’s striking with his much-anticipated wrestling, earning himself a unanimous decision victory on the night.

Despite the disappointing performance, MMA fans weren’t expecting the journey to end just there, as Aldo officially hung up his gloves a few weeks after the bout.

This is all happening while Patrício Pitbull managed to regain his Bellator featherweight championship against AJ McKee and is now set to defend his 145lbs throne for the 15th time against Adam Borics (18-1 MMA) at Bellator 286.

Although Patrício Pitbull understands Jose Aldo will remain a legend forever, he believes Aldo has a lot left in the tank and isn’t finished fighting just yet.

Speaking on this week’s ‘Trocação Franca‘ podcast, Patrício Pitbull congratulated his fellow countryman on ‘a beautiful run’ in Mixed Martial Arts, however, doesn’t believe ‘Junior’s’ retirement isn’t final and is made by others and will eventually return to some form of combat.

‘You feel there was a spark in his decision [to retire], that it was time to stop, that he had already done a lot for the sport,” Pitbull exclaimed.

‘He’s well financially, but I think, for his age, that his fire isn’t out yet. He’ll sit down, enjoy his son that was just born, his daughter, his marriage, and the moment will come where he will have that desire to fight again, and maybe he goes to boxing.

‘There were some talks out there between him and ‘Popo’ [former WBO and WBA champion Acelino Freitas]. He can also do a [MMA] superfight now that he’s not under contract. The world has opened for him one more time.’

With the chances for a ‘superfight’ becoming more plausible for Patrício Pitbull, he still feels that it was a missed opportunity not to arrange a fight between them both whilst they were both in their primes.

‘It would have been good [to fight in our primes], right?‘ Pitbull said.

‘It would have been a decider of who really is the best featherweight. We have very similar numbers. Amount of wins, title defences, submissions, knockouts, length of title reign, etc. Even though many people say, ‘Whoever is in the UFC is the best and whoever is in Bellator is the second best,’ it’s impossible to say that unless you put them to fight.‘

‘It didn’t happen, time has passed, he no longer has the belt, he stopped fighting, but the future is long, and opportunities are endless. We’re not that old. If it’s a fight between two old guys, it’s cool, we’d be equal. Or in MMA, a superfight, everybody is out of contract. Who knows?‘ (Transcribed by MMAFighting.com)

Would you still be interested in seeing Aldo Vs Pitbull?