Bare Knuckle Fighting Championship leader, David Feldman has insisted that former UFC strawweight and flyweight contender, Paige VanZant is in a “must-win” situation most certainly after beginning her stint in the BKFC with a pair of decision defeats.

The Oregon native recently met with fellow UFC alum, Rachael Ostovich at BKFC 19 in July, dropping a unanimous decision loss to the Hawaiian in the pair’s rematch. During their stints in professional mixed martial arts, VanZant handed Ostovich a second round armbar defeat at UFC Fight Night Brooklyn back in January of 2019.

In August of last year, reports emerged that VanZant had penned a multi-fight, multi-million dollar deal to feature under the Feldman-led banner, following a July armbar loss to Amanda Ribas at UFC 251 on ‘Fight Island’ in Abu Dhabi, UAE.

The loss came as VanZant’s final appearance under the UFC’s scrutiny as the two parted ways. Reports suggested that her deal would see her compete for an initial duration of four fights, worth in excess of $1 million.

Debuting in February of this year, VanZant headlined a BKFC: Knucklemania event in Tampa, Florida — where she met with Britain Hart. Over the course of the five round headlining bout, the 27-year-old suffered a unanimous decision defeat. Following the bout, Hart proclaimed that she was a “f*cking feeling” rather than a person — resulting in a viral soundbite across social media.

Following her recent loss to Ostovich, a visibly frustrated VanZant immediately exited the ring and began unwrapping her hands as she walked back up the entrance ramp and subsequently backstage.

Beginning her time in the promotion with less than ideal results, BKFC president, Feldman confirmed that VanZant was in a “must-win” scenario ahead of a third outing with the organization and that he cannot keep claiming that she is fighting admirably if results don’t come in tandem with those performances.

“Absolutely she’s (Paige VanZant) in a must-win situation,” Feldman said during a recent interview with MMA Fighting. “I can’t keep saying, ‘She fought really good, now let’s see what happens next time.’ Eventually and now’s the time, she has to come out with a victory. Like I said, we’ll sit down with her team and see what happens. I think we’re all going to move forward together, but you’re absolutely right, she’s in a must-win situation without a doubt.“

As mentioned earlier, VanZant abruptly exited the venue following her loss to Ostovich, with Feldman explaining how he was less than thrilled with her decision to skirt the post-fight press conference obligations, however, admired her passion.

“I didn’t like that she stormed out of the ring, and didn’t come to the post-fight press conference, but at the same time I liked it for the fact that she did it because she’s so passionate about what she does and I like fighters that don’t take losses good,” Feldman explained. “On the flip side, she needs to do what the company requires. There could have been (a) miscommunication. It doesn’t even matter. What matters is she fought really, really well and we’re going to sit down with her team and see what’s next.“

Following the defeat, VanZant released a statement on her official Instagram, detailing that despite her latest career setback, she was still upbeat.

“Guess what bitches???!!” VanZant posted. “I’m still smiling!!! My story is full of setbacks, road blocks and detours. But, it is also filled with major comebacks, peace in my soul and a grace that saved my life. I promise you this, I would endure this pain everyday of my life over the pain of regret. I am going to keep chasing my dream one step at a time. 99.9% of the people on earth would not dare do what I do. This story will be even better than my first. And if you haven’t read my book before click the link in my bio. That pain is real. This is just a bad chapter. And to anyone out there struggling. Pain is only for a moment. The world may be dark and love to hate on you, but darkness does not drive out darkness only light can do that. SO DO NOT STOP SHINING!!!!“ 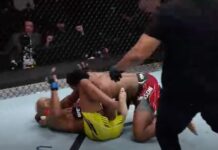 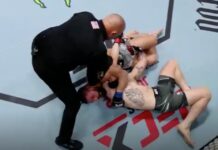