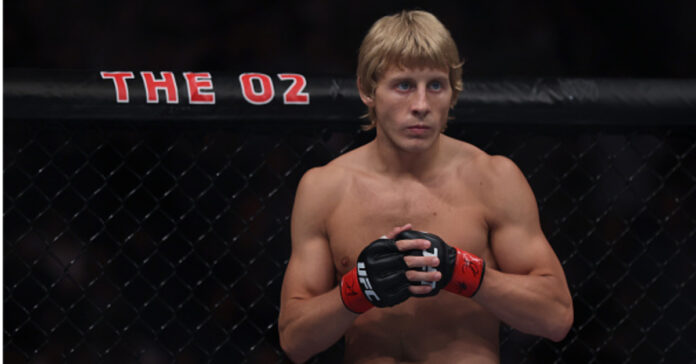 Paddy Pimblett once again gave the crowd in London a reason to cheer as ‘The Baddy’ scored his third straight win in the Octagon. Pimblett became the first man to finish ‘The Monkey King’ Jordan Leavitt when they met at the promotion’s 208th edition of UFC Fight Night. In the opening round, Leavitt appeared to have the advantage in the grappling game, but Pimblett quickly flipped the switch in the second round. In the end, the Liverpudlian made Leavitt tap to a rear-naked choke just past the halfway point of the round.

After his victory, Pimblett gave an impassioned post-fight speech letting the crowd know that he recently suffered a tragedy. A close friend of his passed away just days before his appearance at UFC London.

“I woke up on Friday morning at 4 A.M. to a message that one of my friends back home had killed himself… This was five hours before my weigh-in. So Ricky, lad, that’s for you.”

Following another spectacular win at the O2 Arena in London, Paddy Pimblett arrived at the UFC London post-fight press conference, as expected, with a heap of food and ‘Meatball’ Molly McCann at his side. McCann manned the microphone long enough to let the scouser finish his post-fight meal. Once on the mic, Pimblett took the opportunity to share thoughts on men’s mental health and the stigma that surrounds it.

“As I said, women talk to each other. There’s no stigma on women. They sit around, have a cup of tea, and have a jungle. Men don’t lad. Men feel like, ‘oh I can’t go and say that to him because he’ll think I’m a little mushroom.’ What I mean, that’s what men think, but as I said in the cage, I’d much rather my friend come to me and speak to me and cry on my shoulder than me have to cry while I’m carrying his coffin a week later.

“Split-second decisions ruin lives and that’s what happened this weekend. I just don’t know how Ricky’s mom and sister are getting through this. As I say, he was my friend. He wasn’t [my] son or my brother and it’s going to affect them a lot more than it affects me. As I say, people in the position that I’m in, people who have got a bit of spotlight so you’ve got a bit of a following, they should help people. Anyone who’s in a position like me should try and help someone.”

Paddy Pimblett let members of the media know that helping people is exactly what he aims to do next by setting up a charity to help men who are silently suffering from mental health and feel like they have nowhere else to turn.

“Without all them fans, without all the people that adore us, we wouldn’t get paid. I just like giving back and as I said last time, I’m starting a charity for little kids, the little baddies, but obviously, now I’m thinking about doing a men’s mental health charity because the UK doesn’t give any funding for it. There’s no funding for mental health and it’s the biggest killer for men between 21 and 45 and no one talks about it.”

It was a beautiful moment of sincerity from the fighter who is mostly loved for throwing hands and epic post-fight binge eating. Pimblett confirmed he will be back in the Octagon before the end of 2022, but did not call out any specific fighters for his already anticipated fourth appearance.

If you or a loved one are in distress, call the Suicide Prevention Hotline at 1-800-273-8255. The hotline provides “free and confidential emotional support to people in suicidal crisis or emotional distress 24 hours a day, 7 days a week.”