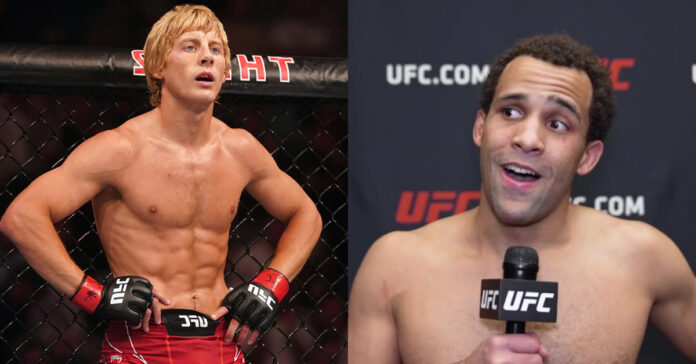 Going into his third UFC fight, Pimblett faced Leavitt in the promotion’s return to the UK for a second time this year. After an early grappling struggle in the opening round, Pimblett came back to secure a submission win over Leavitt to a boisterous crowd at London’s O2 Arena last month.

Things had gotten a bit heated during the build-up to their encounter but remained innocuous, if not cordial after the fight. The two were respectful towards each other after Pimblett tapped him out and even had a brief chat. However, “The Monkey King” got on the wrong side of the local fans for his comments after the event concluded.

In an interview with The MMA Holes, Leavitt had some harsh words for the Scouser’s hometown.

“The UK is the size of Alabama,” Leavitt said (ht Mirror). “That is very small and the fact that one of their guys in such a small part of the world is so popular. How can you not follow him, you know? He is from Liverpool. Liverpool is a dump. The O2 arena is also a dump.”

While Pimblett initially planned to share breakfast with his opponent following the fight, he did not get the chance to. Pimblett fired back at Leavitt’s comments stating that he must’ve took some damage from the bout.

“The better man isn’t he? Someone sent me it and I just started laughing,” Pimblett told reporters when asked about his former rival’s comments.

“I wanted to meet him for breakfast the following morning and give him a book I bought him, but not in a horrible way. And I was just going to say if you want to review it you are more than welcome to do it. It would probably get more clicks than his other book reviews just because I bought it.”

“He has been going around and saying ‘Liverpool is a dump’ and all kinds of things like that. He must still be concussed from that knee to the head because he has never been to Liverpool. London is nothing like Liverpool.”

Do you agree with Paddy Pimblett or Jordan Leavitt?