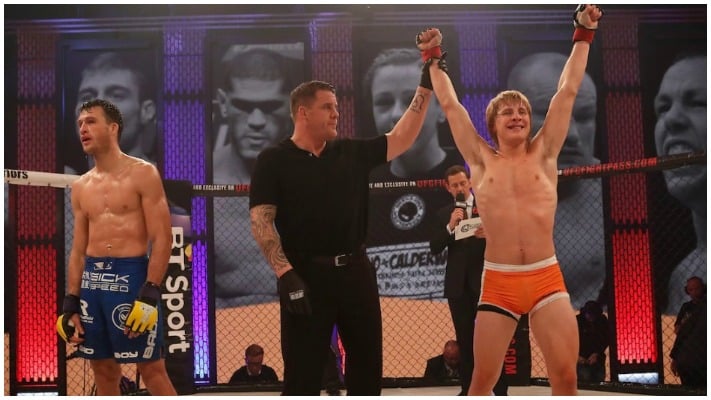 Paddy Pimblett has responded to Julian Erosa’s request for a rematch now that both are in the UFC.

Pimblett is fresh off of his first UFC win over Luigi Vendramini last weekend. The scouser came into that bout with a ton of hype around him. After delivering a knockout finish in the first round, everyone started calling him out and asking to be the next one to get a shot at ‘The Baddy’. One of the more interesting call-outs was from UFC featherweight Julian Erosa.

The two fighters have a little bit of history with one another. Pimblett and Erosa first fought back in November of 2016 under the Cage Warriors banner. It was Pimblett’s first title defense at featherweight and he came out victorious via unanimous decision.

Now Erosa has put out a warning to Pimblett if he ever comes back to featherweight. (H/T mmafighting.com)

“Yeah, people have been posting about that. I could see myself fighting him again. but I’m at featherweight and I can make the weight fine. He said he didn’t really cut much weight to get to 155.

“He looked pretty sucked up, and I remember on an interview he said he was gonna run through the 155 and 145 divisions, and I’m like, ‘If he decides to go to 145 I’ll be waiting for him.’ If they offer me the fight at 155 I’ll fight him, but featherweight is where I’m at.”

Pimblett responded and says that Erosa will have to move up in weight if he wants the rematch.

Would you want to see a rematch between Paddy Pimblett and Julian Erosa in the UFC?