LowKickMMA.com
Home UFC News Nick Diaz Was ‘Freaked Out’ By Robbie Lawler Before Their First Fight 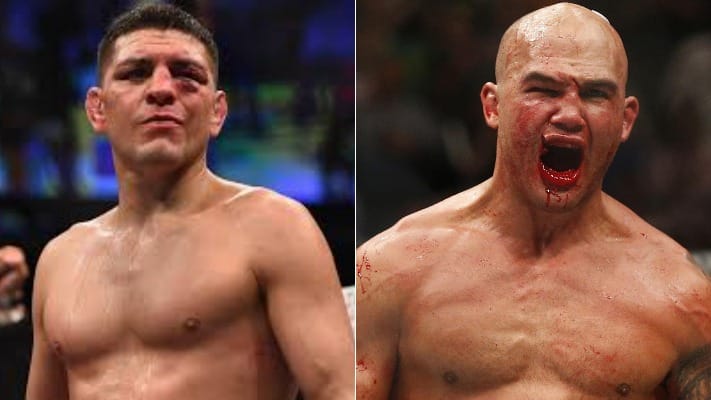 Nick Diaz admitted to having some nerves heading into his first fight against Robbie Lawler.

Diaz and Lawler first met all the way back at UFC 47 in 2004. Back then, both men were still carving out their place in the sport, with the 22-year-old Lawler viewed as a knockout specialist, while the 20-year-old Diaz was considered a jiu-jitsu practitioner with some decent boxing. However, it would be Diaz who would show off the more impressive stand-up up game one his way to a second-round stoppage victory.

Now grizzled veterans, the two men will run it back more than 17 years and 200 UFC events later. They meet on the main card of UFC 266 in a 5-round affair. It is only the second non-championship, non-main event fight the UFC has scheduled for 5 rounds, with the first being between Nick’s brother, Nate Diaz, and Leon Edwards.

Reflecting back on their UFC 47 fight as part of UFC 266 Countdown, Diaz said that the reputation Lawler had gained as a power-puncher and the narrative that he was going to run through the Stockton native got in his head a bit, and Diaz knew he would have to change things up (h/t Sportskeeda).

“So the thing is with Robbie (Lawler) that kind of freaked me out was that he knocked out Steve Berger, Tiki Ghosn… He knocked these guys out, man,” Diaz said. “It was like…there was no way I was going to win and everyone was like ‘oh, you’re fighting Robbie Lawler?’ So when I went out there, I just did what I knew and I spooked him.”

While Diaz was willing to admit Lawler has grown substantially as a fighter in the nearly two decades since, he also feels that he himself has done even more growing. He believes that the improvements he has made will guide him to yet another victory over ‘Ruthless’.

“I’m actually way more of a dangerous fighter than I was when I fought Robbie Lawler for the first time,” Diaz continued. “I’m going to be really unstoppable having made the right decisions… I’m going to beat Robbie again.”

Who do you think will win the rematch between Nick Diaz and Robbie Lawler? Let us know!