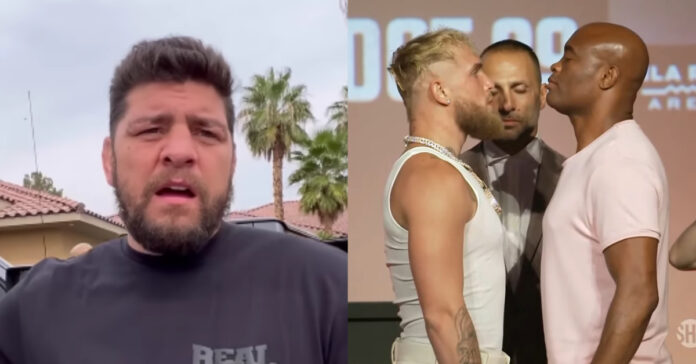 Airing live on Showtime pay-per-view, the fight will emanate from Gila River Arena in Glendale, Arizona. it will be an eight-round bout fought at 187 pounds as originally reported by MMA journalist Ariel Helwani. Paul, who is riding a five-fight win streak, will attempt to add another former UFC titleholder to his resume after having already defeated former welterweight champion Tyron Woodley on two separate occasions.

Recently, ESNEWS on YouTube caught up with tenured UFC star Nick Diaz who gave his brief, but clear predictions for how he sees things going when ‘The Spider’ goes head-to-head with the social media star turned professional boxer.

The 47-year-old Silva finished his mixed martial arts career with a record of 34-11 with one no-contest. At his peak, he defended the UFC middleweight championship a record 10 times during an impressive 17-fight win streak.

On the flip side, Jake Paul will be looking to get his sixth straight win though none of his previous victories have come against legitimate professional boxers. While Silva himself is not a professional boxer, many within the combat sports community are praising Jake Paul for taking a fight with one of the most decorated strikers in MMA history.

Nick Diaz’s brother Nate Diaz has also given his thoughts on the upcoming showdown between Jake Paul and Anderson Silva. While speaking to The Mirror, the younger Diaz didn’t necessarily give his prediction for the bout but believes it would be foolish to count out Anderson Silva because of his age.

“They considered him the GOAT in the UFC for a long time, you know? There was no appreciation for that and I thought that was stupid. I think they’d be stupid if they’re trying to count him [Silva] out at all in this fight, but I also see that Jake Paul could win or do well too,” Diaz said. “[He’s] young, motivated, strong, inspired to box. So, I think it makes for an interesting fight.”

Nate Diaz is coming off of what many believe was his final appearance in the UFC after 15 years with the promotion. Originally scheduled to face Khamzat Chimaev in the evening’s main event, a last-minute shake-up had the ‘Stockton Samurai’ meeting fellow fan favorite Tony Ferguson in the UFC 279 headliner. Diaz scored a fourth-round submission victory, his first win by tap-out since facing Conor McGregor at UFC 196 in 2016.