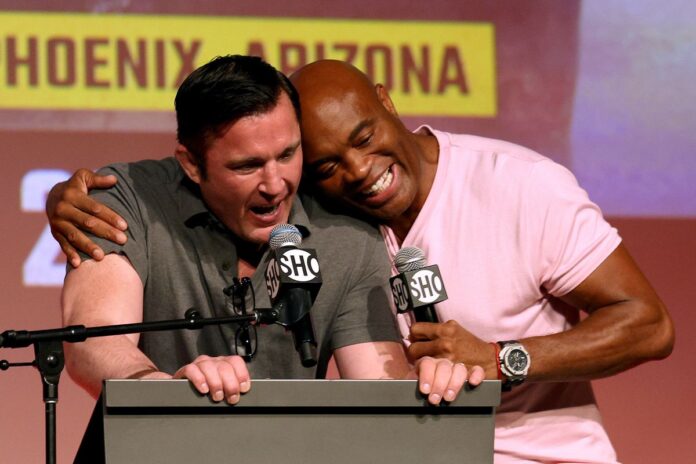 Former UFC middle and light-heavyweight title challenger, Chael Sonnen, was one of the best trash talkers of all time during his heyday. Sonnen was always very sharp and witty in exchanges and his stand-up-like tirades were hilariously unique to him.

Although some were tongue-in-cheek remarks, others went straight for the jugular and some of Sonnen’s trash talk could be seen as over the line and angered some of his opponents.

This was the case in the build up to both of Sonnen’s fights with then 185lb champion, Anderson Silva. ‘The American Gangster’ would attack Silva’s skills, his home country of Brazil, and even remarked he would “Pat Her on the Ass,” in reference to Silva’s wife.

Now over a decade on from their first fight and both men nearing 50 years old, the once intense rivalry has well and truly died.

During the Jake Paul Vs. Silva press conference, Sonnen was brought on as a host and during the event, Silva with his arm around Sonnen would crack a joke about the infamous remark about Sonnen ‘patting his wife on the ass’.

In response to this remark, rather wholesomely Silva’s wife, Dayane, invited Sonnen to have a barbeque at her home.

“You never come to my house for the barbeque, why?” Silva asked.

“Okay, okay, here’s the thing” Sonnen responded. “I didn’t think it was a sincere offer. If I knew I was really invited”

“That’s the real answer why I didn’t come.” Sonnen replied

“I accept, thank you very much,” Sonnen said.

Do you think Anderson Silva will beat Jake Paul?