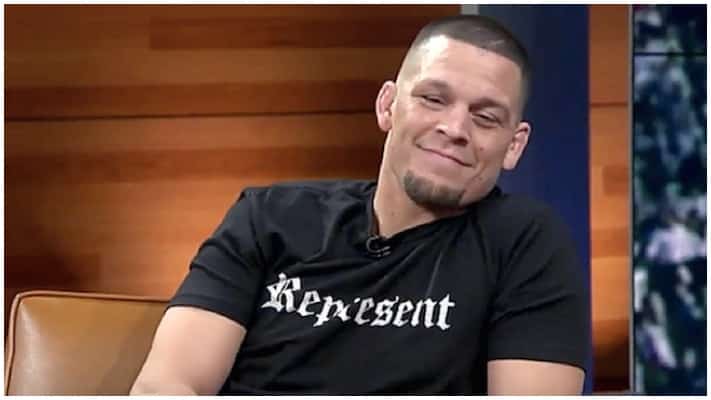 Nate Diaz took a hilarious shot at Conor McGregor after the Irishman tried to intervene in his ongoing feud with Dustin Poirier.

The Stockton, California native has been going back and forth on social media with Poirier about a potential fight for the last few days.

On Thursday, Diaz took to Twitter to provide an update on a potential fight between him and Poirier – it wasn’t good news.

“I knew you was a pussy bitch that’s 2-0,” Diaz wrote. “Boss the fuck up quit being a lil bitch I do what I want You do what your told”

READ MORE:  Anthony Smith Responds To Conor McGregor Trolling: 'He'll Never Be One Of Us Again'

Poirier then suggested that UFC have lied to Diaz about the status of their potential fight.

McGregor, who has been super active on the social media platform since suffering a broken leg at UFC 264, couldn’t help but laugh at two of his biggest rivals’ trading shots.

Diaz replied with a shush emoji and the below GIF taken from Scary Movie 2.

Diaz famously handed McGregor his first loss inside the Octagon at UFC 196. The pair rematched at UFC 202 and it was the Irishman who emerged victorious via majority decision after a close five-round fight. A trilogy bout between Diaz and McGregor seems to be very much on the table but it will have to wait for at least a year until ‘Notorious’ heals up.

Do you want to see Nate Diaz vs. Conor McGregor III?