LowKickMMA.com
Home Global MMA Nate Diaz reacts to being asked to do a Shoey following UFC... 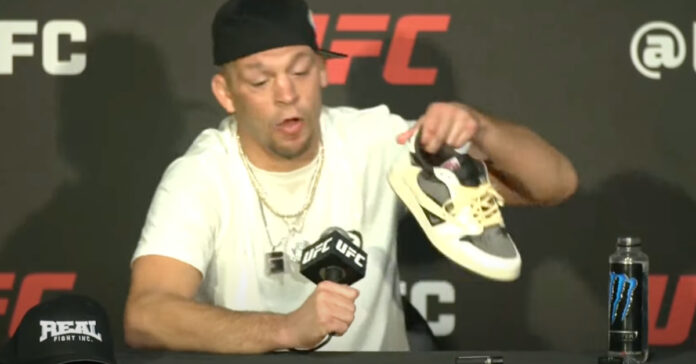 Although there is no doubt Nate Diaz will be celebrating following his victory over Tony Ferguson at UFC 279, the Stockton native showed no interest in taking part with current trends by doing a ‘Shoey’ to sign off on his final win.

The UFC veteran was able to snatch up a guillotine choke in the 4th round to secure him a potential last win in the UFC as he looks to exit the promotion for the time being. Speaking to the media at the post-fight press conference, following his win Nate quickly laughed at the idea of drinking anything from a shoe like so many fighters have done so recently, simply stating:

So, whilst drinking from a shoe is not currently on Nate Diaz’s agenda, he was quick to welcome all those in attendance to his post-fight party when he jumped on the mic with Joe Rogan to reflect on the night and his time within the promotion.

It now seems Diaz will step away from the sport to pursue new ventures with many fans expecting him to eventually take part in this transition to boxing like many former MMA fighters have done, leading to a potential matchup against YouTuber turned boxer Jake Paul.

In what turned out to be a much better event than people anticipated following the reshuffle. Let us take a quick look at just what went down on the main card of UFC 279.

In the opening feature bout, Johnny Walker was able to return to the winning column after he secured a first-round submission over the brawling Ion Cutelaba. However, Walker did not get to savor the moment as the Brazilian was quickly kicked out of the venue following his victory.

Irene Aldana was able to create history when she landed the first up-kick-body shot to finish a fight after a back-and-forth affair against Macy Chiasson.

Daniel Rodriguez and Li Jingliang went the full fifteen minutes after a back-and-forth affair where both men showed their abilities in a heavy striking affair. Ultimately it was Rodriguez who had his hand raised, not to the joy of many fans, after beating The Leech by a split decision.

Khamzat Chimaev was able to continue his dominant ways since joining the promotion as he quickly dispatched Kevin Holland in the first round via submission.

And to top it off, Nate Diaz went out on a high as he and fellow UFC veteran Tony Ferguson put on a fan-friendly affair which saw the Stockton native secure a submission victory with exactly 2:09 seconds left on the clock, a fitting way for the ‘209’ to end his time in the promotion.

What was your favorite Nate Diaz moment whilst he was in the UFC?