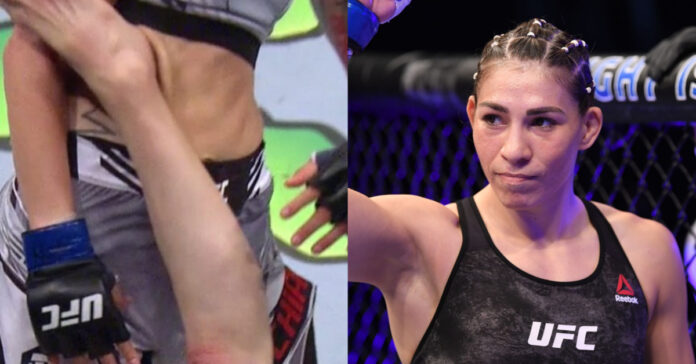 On the main card of UFC 279, Irene Aldana made history as she became the first fighter in UFC history to win a bout via upkick body shot KO.

After an explosive start to the PPV which saw Johnny Walker submit Ion Cutelaba with a clinical rear naked choke, Mexico’s Irene Aldana walked out to face off against Macy Chiasson.

Aldana had immense success in round one, locking up an armbar that appeared to make Chiasson tap. However, the referee did not see, and it didn’t appear to have impacted the fight in any major way. That being said, Aldana picked up what was arguably a 10-8 round.

Round two would be the polar opposite of the first. Chiasson would get top control, landing brutal ground and pound, and searching for her own submissions. The momentum of the fight had clearly shifted.

Chiasson began the third in similar fashion to the second. However, when Irene Aldana wound up on her back once again, she would throw a vicious upkick, with her heel striking the liver of Chiasson. The strike instantly shut Chiasson’s body down, and she crumpled to the canvas in pain.

Aldana would later reveal that this is a technique she regularly drills in the gym. The hard work clearly paid off, with many speculating that fans of MMA will see many similar KO/TKO’s in the near future. Dana White would later announce that Aldana had received a performance bonus for the impressive win.

Check out Irene Aldana’s crippling KO over Macy Chiasson below: