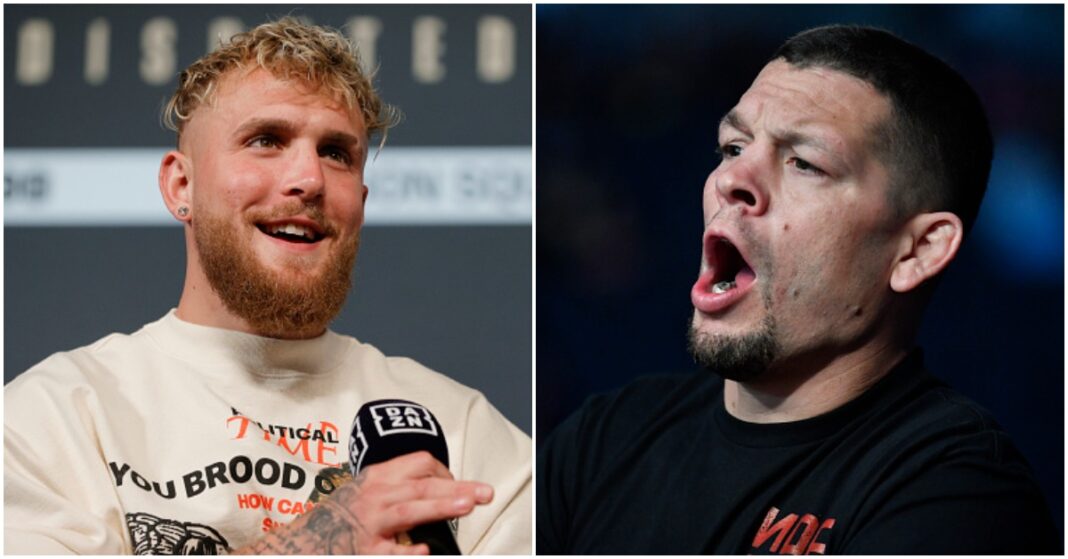 UFC star Nate Diaz was recently told by a reporter that viral sensation Jake Paul has claimed he’d beat the boxing phenom, Canelo Alvarez, if they faced off in the ring.

Known for his funny antics and carefree attitude, Diaz is a beloved part of the MMA world along with his brother Nick Diaz. After being told the information about Paul by the reporter, ‘Mr. 209’ had nothing but disdain for the social media icon Paul.

The video is shot inside a gym, and you can see Diaz and a group of his friends overlooking some people grappling. “Jake Paul says he would beat Canelo,” the reporter tells Nate Diaz.

Diaz appears confused for a second, pondering what he just heard, before cracking a huge smile and laughing: “At what,” he said, chuckling and shaking his head.

“He said he’d do it in boxing,” the reporter said before the video ends with Diaz lightly shadowboxing, swinging a few hooks, while everyone is laughing (at Jake Paul, no doubt).

Nate Diaz vs. Jake Paul: Mere Fantasy, or a Fight That Needs to Happen?

A Nate Diaz vs. Jake Paul fight would no doubt be a blockbuster event. You could only imagine the leadup, and if marketed correctly you’d think it could be somewhat comparable to the leadup of the Diaz and Mcgregor fights.

Jake Paul so far is undefeated in boxing, with knockouts over the likes of former NBA player Nate Robinson, former Bellator, and ONE FC welterweight champion Ben Askren, and more. Most recently he competed against Tyron Woodley in a rematch, knocking him out in round six.

Nate Diaz has been sidelined by the UFC for a long time now, and he’s growing increasingly frustrated. He’s looking to fight Dustin Poirier next but the UFC has been dragging their feet to get the fight done, according to both fighters.

Do you want to see Jake Paul take on either Nate Diaz or Canelo Alvarez?