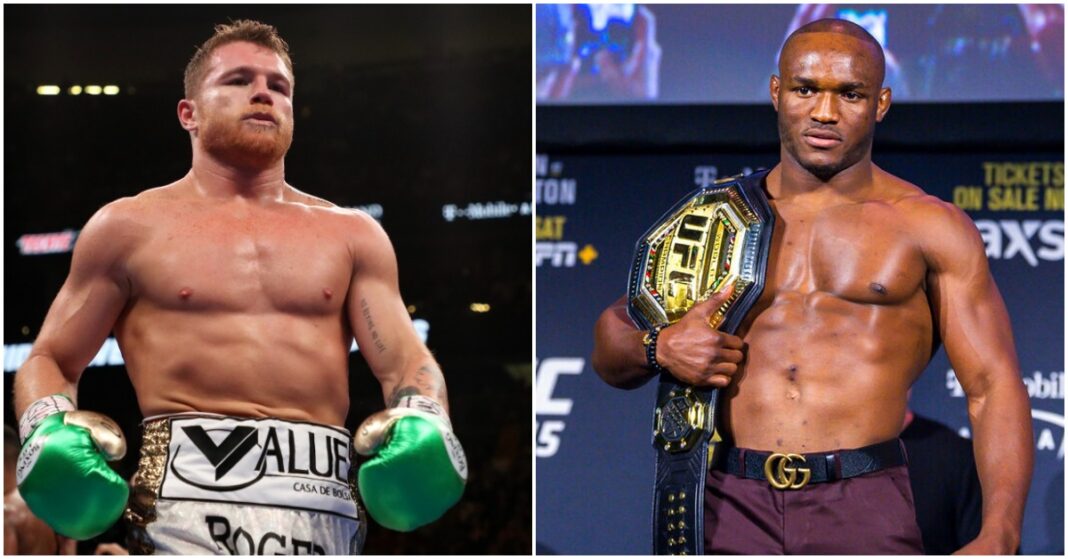 Saul ‘Canelo’ Alvarez has sent a reminder to UFC welterweight champion Kamaru Usman that he will have to mind his time if he ever wants a shot against one of boxing’s greatest.

Speculation has circled around for weeks now regarding Usman’s interest in facing Canelo inside the square, but now it appears one of boxings best may have dampened the UFC champion’s plans.

The pair exchanged an interaction on social media in the past day or so. This originally was started by Usman’s manager who called out Canelo on social media. This is how it went.

“@Canelo is an absolute chicken, he is fighting guys with 5000 followers on Instagram, these guys will never do nothing for his legacy. Now I understand why he doesn’t wanna lose to someone like @USMAN84kg this is chicken style, no risk – no reward.”

Understandably, the first undisputed super middleweight champion did not take to well to this given his highlight-filled career and time spent at the elite level of boxing, so he responded.

Ali replied with a comparison of the two and suggested Alvarez had been ducking Gennady Golovkin for the past two years now.

‘You know who I am, you know what’s the difference between you and @USMAN84kg? You’ve been ducking GGG for 2 years now, but Kamaru have fought everybody UFC threw at him. I’m being very nice to you, because it’s Ramadan.’

This sparked the UFC welterweight champion’s interest who replied with a light-hearted comment.

‘Let’s just all relax… before somebody gets hurt 😉’

To which Alvarez then decided to up the stakes with his response.

Usman responded to him by offering him the chance to find out both inside the boxing ring and the octagon.

Canelo responded to remind Usman it is not his time for the opportunity yet, but that doesn’t mean it won’t be ever.

‘You calling me out right ? You want the pay day right ? So you know where, but sit down it’s not your turn yet I have a legacy to make 👊🏻’

Canelo has his own challenge to overcome first in the form of Dmitry Bivol, whilst Kamaru Usman is waiting to return from injury and defend his welterweight strap against Leon Edwards.

As a fan of combat sports, is this a fight you would like to see?