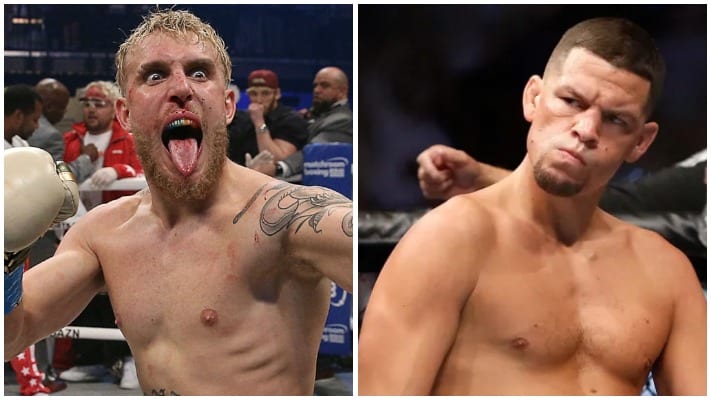 Paul moved to 2-0 last month when he knocked out former NBA player Nate Robinson on the undercard of Mike Tyson vs. Roy Jones Jr. Post-fight he called out SBG teammates Dillon Danis and Conor McGregor. He has since dialed in on a big money fight with the Irishman.

Yesterday the 23-year-old took to social media to publicly offer McGregor $50M to fight him. ‘Notorious’ is currently booked to fight Dustin Poirier at UFC 257 before taking on Filipino boxing legend Manny Pacquiao in 2021 – so a fight between the pair seems unlikely.

Diaz is apparently getting sick of Paul’s talking and warned him to be quiet or risk getting his “ass whooped”.

“Jake Paul u need your ass beat for free u spoiled fuck u can’t really fight dumbshit your gonna end up with your ass whooped for real somewhere talking like that,” Diaz wrote on Twitter.

Paul quickly fired back by referring to his latest knockout win, he wrote.

“You saw what happened to the other Nate.”

Diaz then called on Logan Paul to get his younger brother in line.

“@LoganPaul check this little ho bitch before someone does.” Diaz wrote.

Diaz hasn’t fought since falling short in his bid to become the inaugural BMF champion. After taking a beating from Jorge Masvidal for three rounds at UFC 244 last year, the doctor stepped in to wave off the fight due to cuts Diaz had suffered in the bout. It is currently unclear when he will fight again but Diaz has been in training with his older brother Nick Diaz who is currently prepping for a comeback in 2021 after several years without a fight.

Do you want to see Nate Diaz fight Jake Paul?