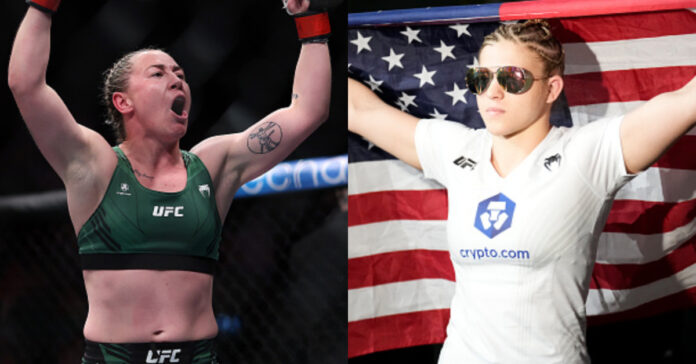 ‘Meatball’ Molly McCann had a near repeat of her spectacular spinning back elbow knockout of Luana Carolina in the UFC’s return to the O2 Arena on Saturday.

With a minute left into the first round of her UFC London contest with Hannah Goldy, McCann landed her patented back elbow. While it didn’t knock out Goldy in the same fashion that it did Carolina, it rocked Goldy, opening her up to a series of strikes that would eventually put ’24K’ away. It was another explosive victory for Liverpool’s favorite fighting female.

Following her win, McCann called out Antonina Shevchenko, the sister of UFC’s flyweight world champion Valentina Shevchenko. Appearing at the UFC London post-fight press conference with her partner in crime Paddy Pimblett at her side, McCann provided some additional insight into her callout of the elder Shevchenko.

“So, I never call anyone out. That’s not fair for me to do, but when you talk about legacy, prestige, and honor, like who’s the best in the game and it’s Valentina. Am I Valentina ready yet? No. Am I Antonina ready? Let’s see. I believe I am. This isn’t like a diss. This isn’t like I think I’m going F-U everywhere. No, it’s not, but I genuinely think this is an amazing fight to have.

“If I ever make it to Shevchenko, they’ll have the blueprint, but I’ll also have the blueprint because I’ll know how to beat her sis there. So with the greatest respect, I’ve said her name because I think she’s the best. So I would like you to tell her that I believe she is the best. That’s why I’m trying to challenge her for that.”

Molly McCann Will Fight ‘Anywhere, Any Place, Any Time’

When asked about the fighters who have called her out, specifically Miranda Maverick, Molly McCann had a rather interesting message to send.

“I’m not a hype train and neither is [Paddy]. We’re from hard-working cities. Blue collar working class. Woke up every day since we’ve ever been alive to chase this dream from where we are from. We will fight anywhere, any place, any time with whoever f***ing wants it. Miranda, if you wanna, I’ll f*** you wherever you want to be f***ed.”

It was an interesting choice of words, but Molly McCann was able to get her point across. Miranda Maverick bounced back from a two-fight losing streak with a win over Sabina Mazo in March. Similarly, Antonina Shevchenko also snapped a two-fight losing skid when she defeated Cortney Casey via split decision on July 9th.